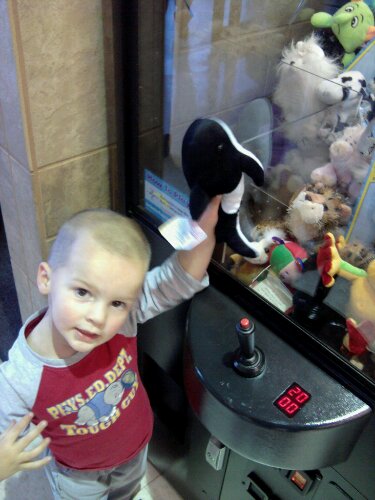 I can’t believe that AJ actually won. I also can’t remember how many quarters I have dumped into these type of machines and have never won anything. The story behind this event is so unreal that I decided I had to write about it so I wouldn’t later think it was some weird dream.
So a random stranger sees AJ playing with the machine and hands him a quarter. I tell the man that he doesn’t need to give AJ a quarter because AJ doesn’t even know how to play the machine. The man insisted so I told him “fine it’s your quarter.” The man then gives AJ a quarter and AJ proceeds to try and put it in the keyhole slot. The man shows AJ how to insert the money into the machine. Then AJ starts to wildly pull at the joystick (which is what I expect any three year old to do when given a joystick with a big shiny red button on it). While he is doing this I am thinking “there went that man’s money.” All the sudden though lights started flashing and a little synthetic tune started to play. This was enough of a prize to AJ who was hopping to the music completely oblivious to the fact that he had caused it. Due to the lights I suppose there were now several spectators. The still complete stranger then showed AJ how to get his real prize, a fuzzy baby killer whale. I of course told AJ to say thank you, and so it is that AJ is now the proud owner of a baby killer whale and I have the picture to prove it.