We are almost done with our trip; we go home tomorrow. I’m sure in the coming weeks John (and maybe even me) will be doing lots of posts covering what we did, what we saw, where we stayed, and so forth. However, in this quick Sunday afternoon post I thought I’d put up a few observations of mine–in no particular order. 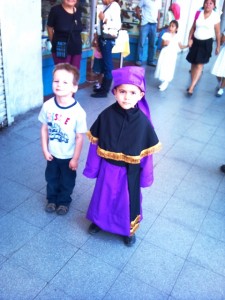 AJ had all sorts of Spanish friends.

1. Traveling with a young child generates a lot of good will.    Most people genuinely like children, and almost everyone we encountered (locals and fellow tourists both) had a smile for AJ. It reminds me that people aren’t just people, they are fathers and mothers, big brothers and little sisters, grandmas and grandpas. For instance, our guide at Tikal was GREAT with AJ. About half-way though the morning long tour, while we were walking from place to place, he asked us if AJ was our only one. When we answered in the affirmative he confided that he was the father of 9! (From ages 5 to 16, 9 in 11 years!) 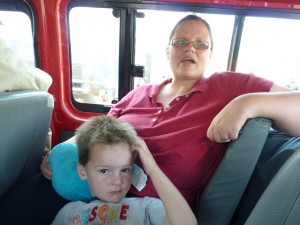 Whenever we asked how long it was to get to a different city the answer was curiously always 6 hrs.

2. The worst parts of the trip is what makes for the best stories. We had no truly awful parts of this trip, but I know John already has a post started about the bus trip from Flores to Honduras–be looking for it! 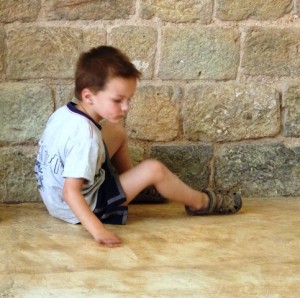 I guess being small gives you a natural affinity to playing on the ground.

3. Even though I CAN do laundry in the sink doesn’t mean I LIKE it.  We always plan on doing laundry at some point on any trip longer than about 3 days, before it’s either been at someone’s house, a laundry mat, or dropping it off with a laundry service.  This time, the one day we could really do laundry was the day that the Country of Guatemala had the water turned off–no running water in the entirecountry!  No washing machines anywhere were working–thus laundry in the sink with a couple gallons of bottled water.  Not so fun. (However, see observation #2!) 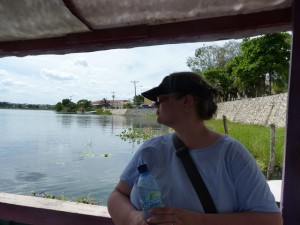 A tribute to the visor that sailed away for greener pastures.

4. No matter how careful you are, at some point, you will leave something behind, somewhere.  For me, it was my visor, and a book I’d picked up at the friends of the library sale, and had been trying to get myself to read.  (I knew I liked the author, but I wasn’t excited about the subject–a tragedy.)  Both were left on a van after a long drive.  We were all a flurry to get out, and I forgot that those things had gotten loose from my stuff during the trip. 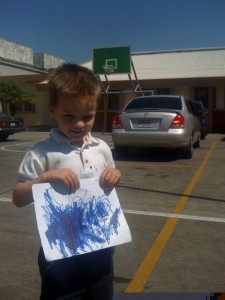 AJ shows off his primary picture in Guatemala City.

5. I already knew that it’s not really Relief Society with out a pretty table cloth.  I now know it’s not really Primary if there is no coloring.  The first Sunday (in Guatemala City) we were planning on only attending Sacrament Meeting.  However, when we prepared to leave before Primary, AJ was visibly upset.  So, we stayed.  When we came to pick him up he was happy to show off his colored picture (of a family in front of a church).  The bi-lingual Primary President told us he was a little nervous at first but quickly warmed.  Today, on the way to the Mexico City ward he told me, “I will make new friends who speak Spanish and theywill have a new friend who speaks English, me, AJ!”  I don’t know what bilingual resources there were today, but,  he showed me two baptism pictures for coloring at home, told me about how he’d be baptised when he’s 8 (like John baptised Jesus) and that he sang LOTS of songs in Spanish.  He was very happy. 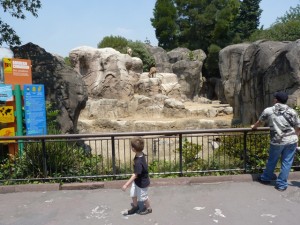 What's the difference between a 4 yr. old and a billy goat? Not much.

For some reason, (EDIT: John added some pictures into this post).  I blog infrequently, and I’ve forgotten.  Maybe, if you check back later you’ll see that John has helped me add some.  In the mean time, check out John’s post below about the zoo.  It really adds some spice to the experience to get a warning to stay on the path so the jaguars don’t get you!!