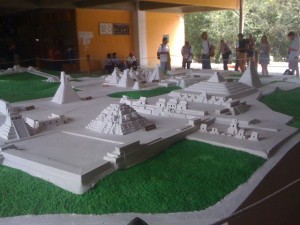 This model shows how Tikal looked like without it’s jungle covering.

In the heart of the jungle lies the Tikal National Ruins. In my quest to learn more about the Mayan people I knew that if I was going to gain a full appreciation of the Mayan culture it would be necessary to visit Tikal, the ancient capital of the Mayans. 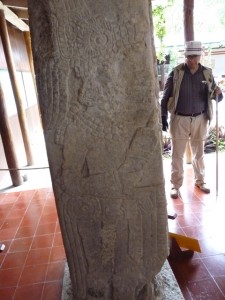 This stella talks about how the Teotihuacanos came from Mexico to conquer the Mayans.

Archeological evidence hints that Tikal was first established around the year 600 BC (did someone say Lehi?) . At the height of it’s power in about 200 AD it is believed to have housed over 60,000 people. In the year 378 AD a Teotihuacan warrior (yes, all the way from Mexico) named Siyaj K’ak arrived to the city. His name translates to “the birth of fire”, and to make a long story short he lived up to his name and for the next 200 years the Tikal Mayans would be sending tribute up to the Teotihuacanos in Mexico. Mysteriously the Teotihuancanos stopped coming for their tribute in 500’s and Tikal experienced some major political revolts. It wouldn’t be until 682 AD when King Ah Cacau (gotta love a guy who names himself King Chocolate) comes to power that the city experienced it’s last period of growth. This growth period would continue until about 900 AD when the city was finally abandoned and forgotten. 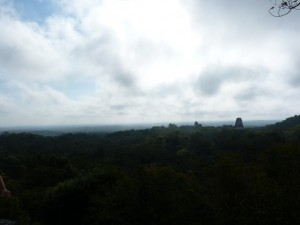 A view from the top of Temple IV.

In 1525, the Spanish Conqueror, Hernan Cortez, passed by Tikal but didn’t stop and his scribes barely mentioned the ruins at all. It wasn’t until the 1950s when University of Pennslyvania professors started to dig around the area that Tikal was once again remembered. In 1977, George Lucas decided to use Tikal as the backdrop to the movie Star Wars IV: A New Hope. It sounds really stupid, but it was because of this movie that I first found out about the place. 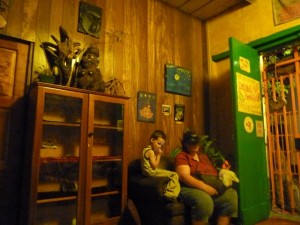 Getting to the site was interesting. You can stay in the Tikal National Forest with rooms starting at $50 USD a night, but we stayed in a small island town called Flores. There were many reasons for this but to say that our private rooms cost us $15  USD gives you a hint of one of our main reason for staying in Flores. Flores is about an hour away from the Tikal National Forest. Because of the heat of the jungle we booked a tour that left our hotel at 4:30 am. All in all, it cost us $125 (31.25 per person) for three adults and one child to visit the Tikal ruins. That included transportation there and back with a guide ($50), entrance fees ($63), and pre-made sack lunches ($12). If we wanted to we could have reduced that quite a bit, we went for convenience. The transportation was a small group tour, we spent $3 extra to visit the on site museums, and we could have made our own lunches but after walking in the heat it was nice to have our meals made for us. 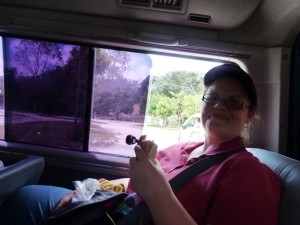 Our chicken sandwich lunch was very yummy and convienant.

Going to the Tikal ruins is a great experience but you need to be prepared. When the Mayan people lived in Tikal they deforested the jungle, but after over 1000 years it has come back in full force. The jungle is big, it’s hot, and it is full of lots of animals. Arriving at the site we immediately heard the howler monkeys who were not happy to hear us coming, they were kind of like the bees, leave them alone and they will leave you alone. The real danger is mosquitoes, by the time you see them it is too late. On advise of our doctor we have been taking Malaria medicine, but as an extra layer of protection DEET is recommended. The site is quite expansive and travelers should be aware that you will be walking a lot. Along with that bringing a lot of water is a must. The ancient Mayans had this thing where they would build on existing mountains and hills and so there is a lot of going up and down in addition to climbing lots of steep pyramid stairs. 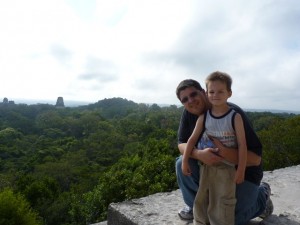 AJ and I carefully looking out to Tikal.

Overall, however the site was amazing. It was pretty much exactly what I expected it to be, breath taking. I don’t know if I will ever get to go that way again, we also didn’t get to see everything,  but even if I never make it back I am more than pleased with what we did. Here is to accomplishing yet another goal on the list! 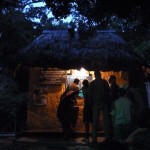 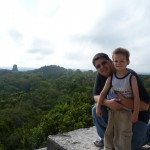 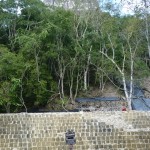 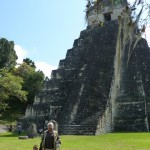 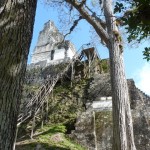 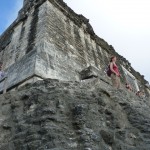 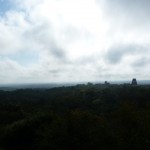 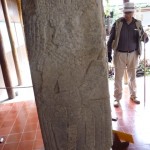 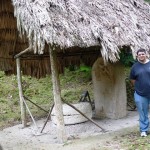 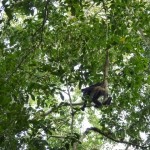 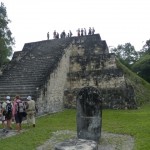 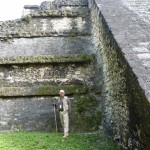 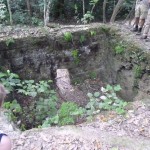 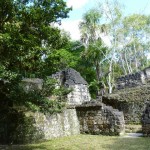 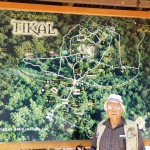 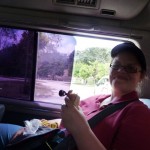 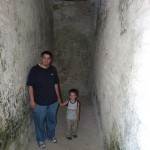 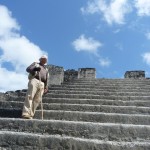 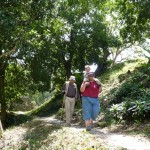 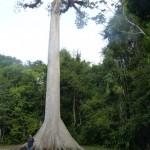 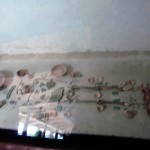 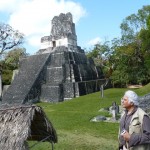