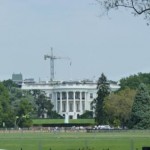 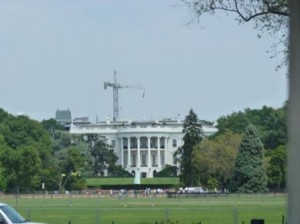 The corner stone for the White House was laid in 1792, but it wouldn’t be until 1901 when it would get it’s official name. It was then that someone asked Theodore Roosevelt about the place and he said “oh, it’s just a big white house…” The name stuck and here we are, or were I guess.
Getting to the White House is relatively easy. Luckily, you can ask any local and they know where it is and can tell you how to get there (and if they can’t they they have some major direction problems).
While getting to the White House is easy, getting inside the White House is not. Most of my pictures as you can see are from far away. One of my favorite pictures I took was from up top of the Washington Monument looking down onto the White House (I wondered if the guards could see me up there): 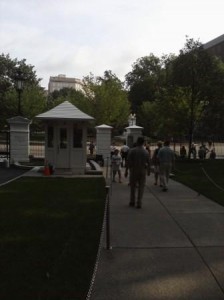 Invitations are free but unfortunately, I don’t know any members of the Presidential family and so getting a Presidential Invitation was out of the question. The next best thing was to get a Congressional Invitation to the White House. To get a Congressional Invitation you need to be recommended by one of your US Congressional leaders. Like every US citizen (if you are not a US Citizen you have to be recommended by your US Ambassador) I have three of these people (2 Senators and 1 Representative) and so about 6 months before we left I wrote to all three. I sent them my request along with the full names of everyone in my party, addresses, DOBs, Social Security numbers, and a description of what valid form of picture ID we were going to use (in our case California issued driver licenses, children under 5 do not need a picture ID). I followed up regularly with my Congressional leaders’ offices to see how the progress was going, but was ultimately told I wouldn’t know anything until at least 2 weeks before we left. As it turned out the first Senator I wrote to lost my paperwork, the second Senator tried, but was not able to get a spot, and ultimately 10 days before we were about to leave our Representative Jerry Lewis got us an invitation. This to me was funny because our two Senators are Democrats (the same party of the President), but our Representative is Republican. Anyhow, soon enough we got our invitation in the mail.
Normally to get into the White House you have to be a group of 10 or more people. We were only a group of 4, so our Representative put us together with another family named Flynn (don’t know them at all). The paper we were given had this name on it and a confirmation code. We were told to bring the paper with us at our appointed time and we could go on our tour. All good except for the fact that at 5:30 EST the day before our tour we lost the paper we were supposed to give to the SS (Secret Service). Lucky for us, we don’t live in EST, we live in PST. So even though Representative Lewis’ Washington DC office was closed, the Redlands, CA office was still open. Jerry Lewis’ staff was very helpful to us. The Redlands office blackberried the Washington DC office, which then emailed the White House, which then put us on a list for the Secret Service and so we were still allowed in. Talk about cross-country teamwork!
To start the tour you have to find the General Sherman monument. 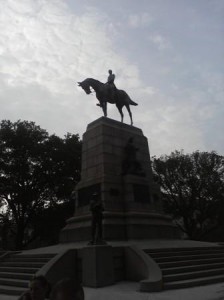 This is actually across the street from the White House. The somber mood of General Sherman on his horse I think denotes the seriousness of the entire security process. As if getting back-grounded wasn’t enough you must also get booked. Oops, I meant screened, but having seen people get booked I wouldn’t say it was much different. You are not allowed to bring anything that doesn’t fit in your pockets and your pockets better not contain anything illegal or you will be escorted out by several people with Colt 45s. When it comes to the White House you also have to know that you are not allowed to bring in any recording device. This was kind of funny to me because they allowed me to bring in my cell phone which clearly had recording capability, not that I had any motivation (first tour I ever had where the docents were fully loaded) to use it inside.
Since I wasn’t able to take pictures inside the White House I have some pictures I got from an archived President Bush website(during his administration there were no tours) and a scan of our tour map: 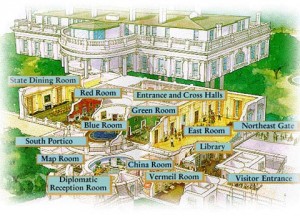 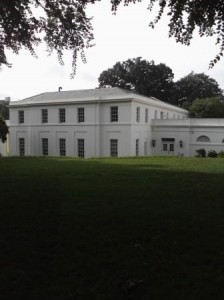 The East Wing is where the First Lady’s offices are. I am not sure what business goes on in those offices, but her staff was very busy going in and out of locked doors. This was interesting to me because Michelle Obama was in Spain when we were visiting. I wonder if her staff doesn’t get to travel with her or if it is like a Broadway production where there is more than one cast. If so, I have to say the local cast was very engaged in their work.
After walking through a long hallway we found ourselves under another underground hallway (a lot of Washington DC is underground) that lead to the China Room, Library, and Vermeil room. It also lead to the West Wing (the executive offices of the President), but we were only allowed to go half way down the hall. Even though I didn’t get to see the West Wing I learned that the current Press Room used to be an indoor pool. I also learned a little trivia about the Vermeil room. The Vermeil room houses portraits of 20th century first ladies. The most striking of which I think has to be of Jacqueline Lee Bouvier Onassis Kennedy (she really liked accumulating those names didn’t she?): 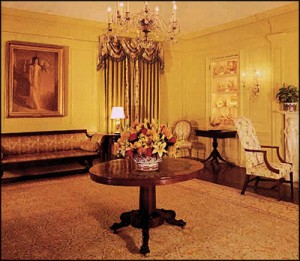 As interesting as the portrait was, it was the name that was more interesting to me. Apparently, vermeil is when you take silver and dip it in gold. It makes the gold even shinier (I didn’t even know that was possible). This Vermeil room is filled with a lot of objects decorated in this manner, hence the name. Heading back into the hallway a Secret Service guy told me a story of President Obama setting up a ping pong table in the hallway and playing an epic ping pong tournament (he wouldn’t tell me who won).
Going up a well worn marble staircase, we entered into the East Ballroom. 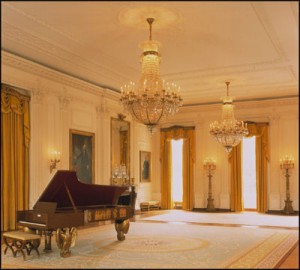 The painting of George Washington is of course the famous one Dolly Madison saved in the battle of 1812, and consequently is the oldest thing original to the White House. The piano is a Steinway and was donated 1938.
After going through the East Ball Room, you get to walk through the Green room, the Red Room, the State Dining Room (where they get daily fresh flowers), and the blue room: 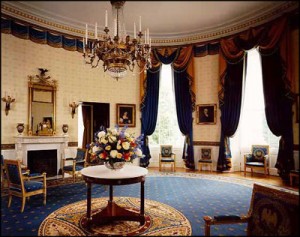 The Blue Room was my favorite room of the house. According to the Secret Service it is the Obamas’ favorite room too. President Martin Van Buren was responsible for it’s color when he first painted the walls in 1837.
To go through the main floor rooms, you get to go through the Cross Halls. 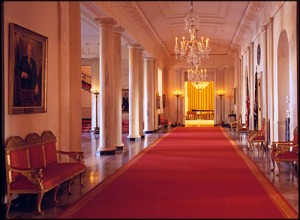 This particular view of the Cross Halls to me is cool because it is the one that they always show when the Secretary of State is going to meet a foreign leader.
After the tour and we were outside again I was allowed once again to touch my cell phone and so I took these photos at the North door. 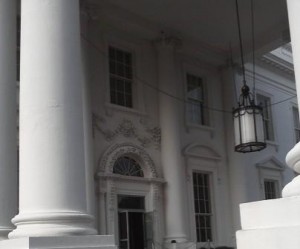 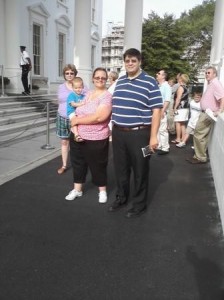 Undoubtedly the closest picture I will ever get to take of the White House. Anyhow, the tour was awesome. Definitely, one of the highlights of our trip. 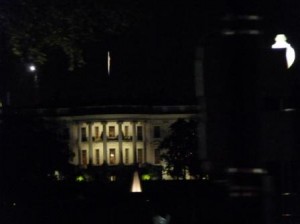 BTW, if for some crazy reason the President does read this I think I would make perfect fit for a White House Staffer: 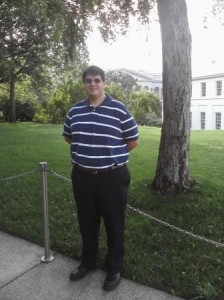 See what I mean, now all I need is one of those red A pass cards and I will be all set!