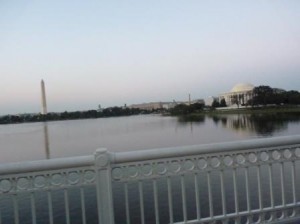 As the southern bookend to the National Mall, the Jefferson Memorial shows me the southern nature of Washington DC. The original plan for the Capitol was to include parts of Virginia, but that was not to be. If Virginia had been included I think that the Jefferson Memorial would of made for an appropriate gateway. Due to our travel plans we got to see this monument both early in the morning and right before dusk: 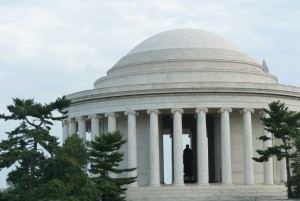 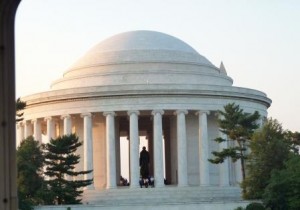 The view at dusk is remarkably more dramatic, but as you can see there were a lot more people there at dusk than dawn.
Almost like all US Capitol monuments you will be immediately struck by the size. 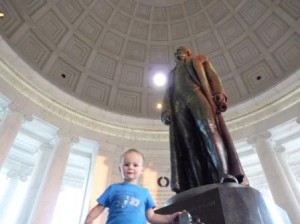 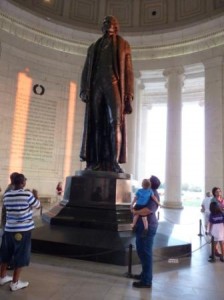 Cast in bronze the Jefferson Memorial towers above you. Construction began in 1939, but because of the shortages of World War II, there wasn’t a bronze statue built until 1947 (in the interim they used a plaster statue).
Besides it’s enormity, I really enjoyed looking at the columns. 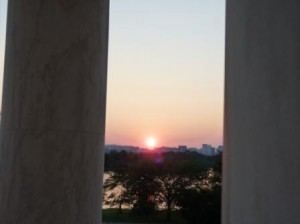 One thing you may or may not notice is that Jefferson is pointed to the White House: 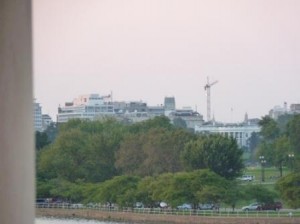 I asked the Tour Guide about that and he said it was done that way by the designer so that the current President would always know someone was looking over his shoulder. Don’t know if it is true, but it sounded cool.
I don’t think we think of Jefferson so much as a architect, but his design influence is definately felt within every Federal building in existance.
The last thing I think about when I think about Jefferson is his words. Inside you will find excerpts from the Declaration of Independence and from A Bill for Establishing Religious Freedom, 1777. 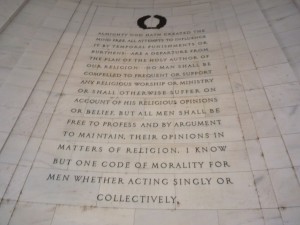 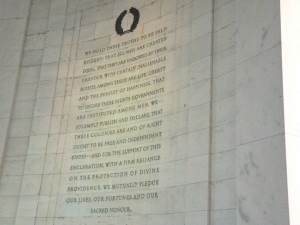 Admission to the Jefferson Memorial is free and there is no screening, but there are plenty of armed park rangers standing by so I wouldn’t act too crazy if I were you!