Visiting the Capitol in Washington DC is fascinating. If you go as a tourist you will see many things. You will see exhibits, statues, paintings, and even a movie. Surprisingly you will not see the reason for it’s being. The Capitol was created as birthplace for laws. They talk about that a lot on the tour, but you never see it happen. To see a law you need to visit either the Senate or House Gallery. In order to do this you will need a ticket, and luckily it isn’t that hard to do. Basically it just takes some footwork, so comes the purpose of this post (if you want to make this post really short just skip to the last paragraph).

To get a ticket you have to go to either your Senate or your Representative’s office. In our particular case we had already gotten tickets to the House of Representatives but they were not in session while we were there. The Senate was in session, so our first mission was to find out where our Senator’s office was. There are three Senate Office buildings: Russell, Dirksen, and Hart. I could have figured out what building I needed to go to by looking it up on the Internet, but that would’ve of course been the logical thing to do. I instead asked a random guy on the street. He in turn told me to go to the building with a green roof. The building with a green roof turned out to be the Dirksen building. The Dirksen building is what you would imagine a Senate Office to look like. Very old, Federalist style, lots of marble, and very big. 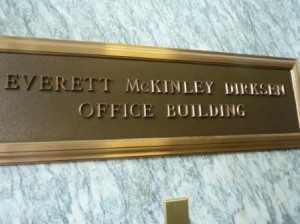 Like with all government buildings at Washington DC you have to go through screening to get in. At the entrance of the building is a very long list with all the states and their Senators. I found out that Senator Feinstein’s office was 331. After getting lost in the elevator and walking down a very long corridor I made an interesting discovery. There was no office 331. This was rather peculiar to me because I was pretty sure that Senator Feinstein was my Senator and she wasn’t under any indictment that I knew of, but then again I couldn’t find that office. What was weirder was that even though there wasn’t a 331, there was a 332. So I went into office 332, which turned out to be Senator Benard Sanders office. Senator Sanders is from Vermont, one of only two Independent Senators in the Senate. His office was really small, but his staff were really nice and helpful. I found out that he doesn’t like the name Benard and prefers to be called “Bernie.” I also found out that both California Senators were in the Hart building next door. Bernie’s staff directed me to this kind of covert bridge that linked the two buildings together and I was once again on my way. 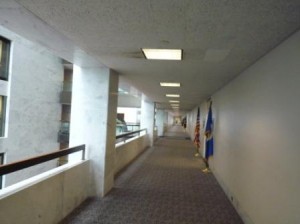 The Hart building is a very distinct building. Kind of the exact opposite of the Dirksen building. Instead of marble, there was lots of glass. Instead of long passageways the offices were arranged in mostly circular pods. A definite modern change to the Federalist style I had seen throughout Washington DC. 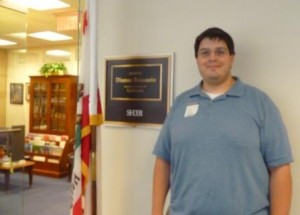 The first office I found was Senator Feinstein’s. Her office was much bigger than Bernie’s. There was lots of staff in there. A nice lady asked me what I wanted and gave me the tickets. I was also later invited to have breakfast with Senator Feinstein, but we had to turn her down because we had an appointment at the White House on the same day of her breakfast. It was a very quick transaction. On my way out I saw Senator Boxer’s office: 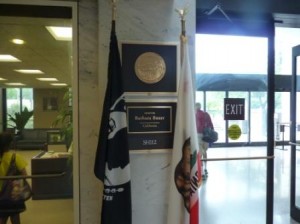 It was in a corner and it was one of the biggest in that building. I didn’t go in but I must of seen several dozen staff members in there.
While I was lost in the elevator I found the cafeteria. I think one of the best kept secrets in Washington DC are the government cafeterias. They have great food, they are way cheaper than all of the above ground concessions (almost all government cafeterias are in the basement), andto you get hang out with staffers. Anyhow, as soon as I found the Senate cafeteria I called Denise. While Denise made her way down the long hallways of the Dirksen building I ordered Senate Bean Soup. 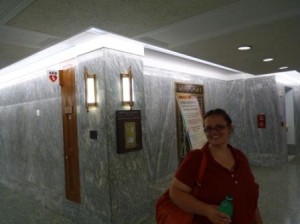 It was good, but as with many things, it wasn’t as good as the hype. It was good though, and I really liked the ham melt special I got with it. 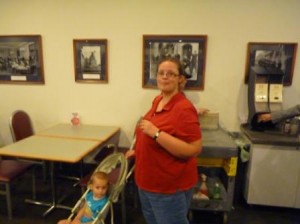 Anyhow, if you want to see a law come into being here in the United States all you have to basically ask. Go to your Senator, get a ticket, and you can see the laws of this country come into being. It is a very interesting process. When we were there they were debating Supreme Court Justice Kagan’s nomination. One of the amazing things about American government is the access you get to it. 9/11 has added lots of security, but it is still a government “of the people, for the people.”