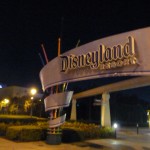 Walking into the Disneyland Resort is always exciting.

It has been a long time (18 months) since we last went to Disneyland so when Disneyland offered their Southern Californian discount rates we were quick to take the bait. Basically the deal is for $99 you can get two one-day tickets or for $139 you can three one-day tickets. For an extra $30 dollars per ticket you can upgrade to a park hopper (these allow the ticket holder go to both parks on the same day), but I have never seen the value in park hopper tickets so we stuck to three one-day park tickets. 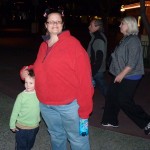 AJ and Denise were very excited to visit.

For our first time back we wanted to go big. To do this we got a little help from our mortgage company. It is no secret we are going into foreclosure. To prepare for this and the inevitable moving costs we plan to incur we have been saving all of our missed payments. Well, after 6 months we can say we now have enough (at least we think we do) to move someday into an apartment and pay for three days at Disneyland.

For as much as we had a budget for Disneyland we want to stretch it out as much as possible. To do this a little bit of pre-planning goes a long way. First we decided to stay overnight in the Disneyland area. We thought about staying at the Disneyland Hotel, but the cheapest room we could find was $220 a night (which didn’t include resort or parking costs). We instead made a low-ball bid of $35 dollars on Priceline and ended up staying at the Quality Inn Suites (only one block away from the Disneyland park). At a total of $50 per night it included parking for two days and a free breakfast. 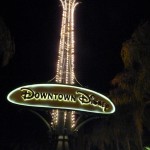 Downtown Disney has lots of lights.

After getting checked in to our hotel we headed off to see the newly refurbished Disneyland Hotel and Downtown Disney. Downtown Disney is basically Disney’s response to Universal’s very popular City Walk. If you still don’t know what I am talking about think very overly themed mall. I don’t normally enjoy walking through malls, my thoughts on most of them is that they are crowded and overly priced. Downtown Disney lives up to the stereotype in that it is crowded and all the stores are expensive, but with the plus is they have lots of street performers which livens up the experience. They are all trying to sell you their latest CDs, but you are under no obligation to buy anything. The one thing we did happen to buy while we were there was a replacement ipod cord. Kind of random, but my old one was getting kind of worn and I had forgotten it at home. 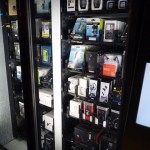 A very high tech way to get a replacement ipod charging cord.

The vending machine it came out of was kind of fun. It was one of those robot electronic vending machines. Best Buy was sponsoring it and you could buy anything from a ipod cord to a laptop computer. After walking through Downtown Disney we arrived at the Disneyland Hotel. 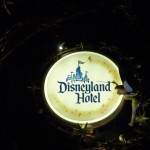 Not as big as the original Disneyland Hotel sign but very themed none-the-less.

The Disneyland Hotel is of course almost as classic as Disneyland itself. A funny fact about the hotel is that when it first opened it was not opened by the Disney Company. It was owned by a man called Jack Wrather. It was meant to be a quick motor inn hotel that people could use to visit Disneyland. It was such a good deal that by 1989 the only way the Disney Corporation could get out of the contract was by buying out the Jack Wrather’s entire company (which wasn’t small). 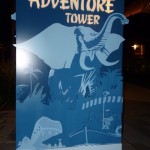 Each tower shows off their theme in the tower signs.

The Disneyland Hotel has undergone many changes over the years and this latest refurbishment is a sort of a nod to all that history. Each tower (Fantasy, Adventure, and Frontier) has a themed lobby. In the center of the three towers is a huge pool themed in a retro monorail look. Also in the center is a Tiki Room inspired bar called Trader Sam’s and a restaurant called Tangeroa Terrace. 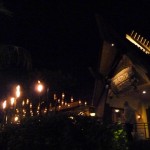 Inside the Fantasy tower you can buy a very expensive breakfast with Goofy or an expensive steak at a place called Steakhouse 55. 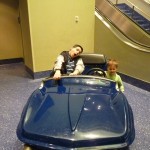 Little did I (John) know how prophetic this pose would be.

We ended up not going with either of these options. Instead we went to McDonald’s across the street, just content to watch the monorail go by. Although before we left we did buy our tickets so we wouldn’t have to waste time waiting in the ticket booth lines the next morning (TIP: you can also buy and print your tickets online these days).