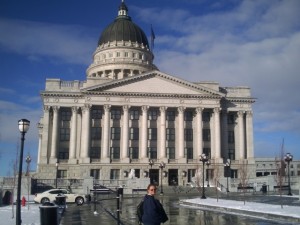 When we went to the Utah State Capitol it had just snowed. It was a little cold, but being used to the cold that didn’t really bother us much. The Utah State Capitol sits high on a hill and is visible from almost any point in Salt Lake City. The first thing you notice is it’s many columns, which when you first go into the visitor center they painstakingly tell you how each one was retrofitted for earthquakes (kind of boring, sorry I didn’t take any pictures of that part of the tour).

Taking the tour you are first shown the grand rotunda. 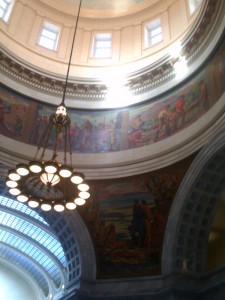 Decorated on the rotunda are various scenes from Utah history. I never thought of anyone else besides Native Americans and LDS pioneers visiting Salt Lake City, but the first non-Native Americans to Salt Lake City were actually two Catholic Fathers named Dominguez and Escalante in November of 1776. 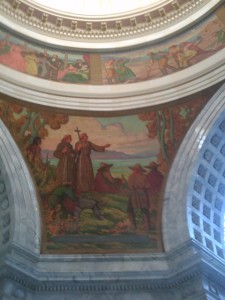 They got to Salt Lake City, looked around, said “this is NOT the place,” and promptly left.
It wasn’t until 1847 when Brigham Young came into the valley that  any meaningful modern development of the site started. Surprisingly for all of it’s LDS history there are not really many references to the LDS faith in the Utah State Capitol. There are lots of murals depicting pioneers, but those could of been any pioneers the way they are painted. There are two murals however that depict Brigham Young and the one inside the House Chamber even shows the Salt Lake City Temple: 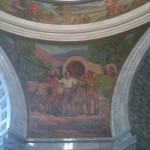 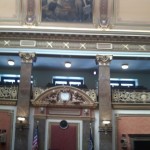 As the tour guide will tell you, Utah very proudly has a part-time legislative branch and so when we were there they were out of session. This was good however because we got to walk right onto the floor of both of the chambers. 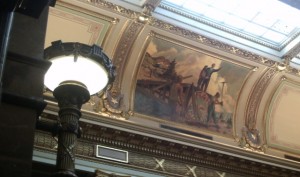 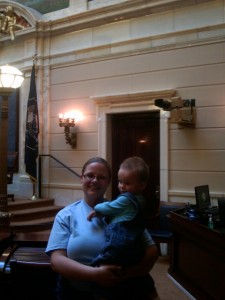 If you notice in the picture Denise is holding AJ. This was not because Denise or AJ wanted any sort of cuddle time. It was because AJ saw those roll down desks in the Senate Chamber and instantly wanted to see if he could open them all up. I have no idea what those Utah Senators keep in their desks, but I didn’t really want to find out. Nor did any of the state troopers there want us to find out as well.
We toured the old Supreme Court chambers (sorry pictures came out too dark there) and then finished up in the Governors galley. The Governor was in when we were there, as noted by the fact that I saw what I think were some lobbiest waiting in his waiting room. We did not see the Governor of Utah, but we did see his ceremonial office (he has two). 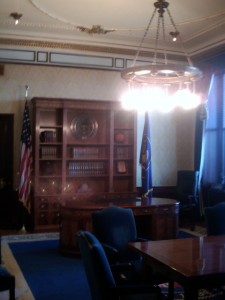 The one we saw is the one he uses whenever he is on TV or is going to take a picture. Also of note was the State Reception Room: 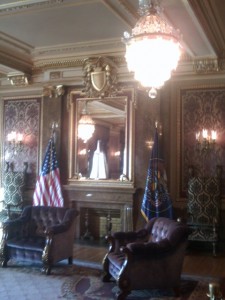 Visiting the Utah Capitol is free and they are open M-F 9AM-5PM. Tours are given every hour on the hour. If you want to have some additional inside fun download this BINGO CARD. If you tell the visitor center where everything on the card is you can get a prize.