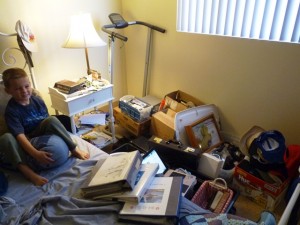 AJ helping me sort through all of “my stuff.”

This is all of “my (John’s) stuff.” I say “my stuff” because there is lots of stuff that I consider “our (family) stuff.” I don’t know what gets into me sometimes but every so often I have these urges to just surge ahead and do something.

This latest urge came from the an early morning workout session. I have a pull-up bar in my closet. Every other day I get up and I attempt to do a full pull-ups on the bar. It is a pretty pathetic attempt, but due to the position on the bar I am forced everyday to look at all the junk in my closet. Somehow in the brief moment of pulling up on the bar I decided I wanted to get rid of all the junk in my closet. You would think I would have done something right there and then, but I didn’t. However, the idea just kept nagging me in my head, but I didn’t act on it. Kind of a weird concept if you think about it.

Anyhow, a few days later I am sitting on my bed and I am again staring at my closet and I decide “right now I am going to go and throw away a box of stuff!” So, I get up take down the first box I can see and a picture falls out of it. Bad move, turns out the picture was interesting, which led me to open the box and find more interesting pictures. I decided I wanted to keep some of the stuff, but I still have a strong urge to purge my stuff so I decided I was going to force myself to at least look at all of my stuff.

In the process of looking at all my stuff I have noted that I do indeed have lots of stuff. I think everyone has lots of stuff. I guess we accumulate stuff for all kinds of reasons, but in thinking it about it, it just is stuff. I have pretty much come to the conclusion that stuff needs to be useful and when it is no longer useful it needs to be removed. 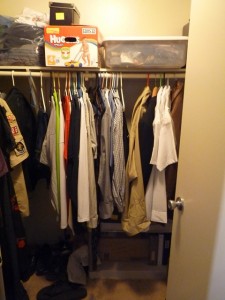 My stuff a bit more organized.

Luckily, I have found lots of ways to reorganize my stuff. I think my best weapon for reorganizing my stuff is to digitize it. A lot of stuff can be either scanned or I can take a picture of it, and it is almost as good as having the original item. I still have a long way to go but everytime I get rid of something it makes me strangely a little bit happier. As of right now I can put all of “my stuff” in my side of the closet. I have two containers under the bed as well, but I could put it on my side of the closet if I wanted to. I still want to continue to purge my stuff, but I am not exactly sure how much more stuff I want to purge. I would really like to one day get an exact count of what I have.