↓
Home→AJ→The Handsomest AJ in the World!! 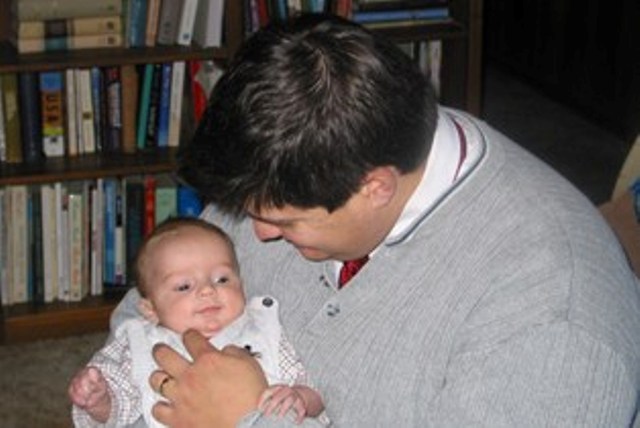 “Nothing too terribly exciting happened at the Pedroza’s this week, so it’s time for our favorite filler: cute pictures of AJ!

Look at that puffy hair! It lays down perfectly flat on the side and in the back. However, at the top of his head it sticks straight up, very funny! In the back the baby bald spot is almost gone, since AJ turns his head to sleep and isn’t constantly rubbing the back of his head anymore. He is getting really good at flipping from front to back and back to front, but he hasn’t yet managed either rolling, the army crawl, or the normal crawl. His left side is the “”hinge”” and he pushes off from the right going back to front, front to back several times in a row before getting tired.

He grabs and holds with abandon now, but hands are mostly for getting things to his mouth. He has a soft stuffed animal in his crib. When he grabs it, yep, he puts it on his face! Everything goes in the mouth. He can mostly maintain a hold on his bottle, if we put his hands on his bottle. He doesn’t yet reach for it, but if we put his hands there they’ll stay there supporting the bottle for at least 5 minutes at a time. We still use the “”soothy”” pacifier, mostly at church. However, if he’s not too tired he tends to grab for it and move the pacifier so he can chew on the thick rim rather than suck on the nipple. I think those first teeth are coming soon.

This is one of the easiest ways to make AJ laugh: the baby as a hat game! John rubs AJ’s tummy against the top of John’s head. If AJ is wide awake this is sure to make him laugh and laugh. One of his other favorite things is a little music box attached to a crib mobile that plays Brahms’ Lullaby. I think it’s the music he likes; maybe it’s the rotating animals, maybe both.

One more picture for the road. See you again next week!”