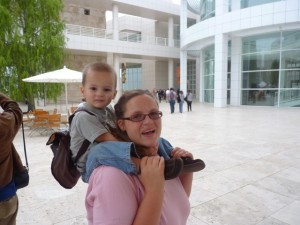 Recently we went to visit Denise’s brother in Los Angeles. The main point of our visit was to see our new nephew Jonah, but there is only so much time you can stare at a baby so we decided to plan something more than just baby staring (which would of probably been a bit creepy anyway). 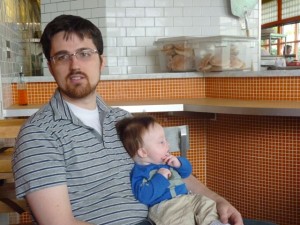 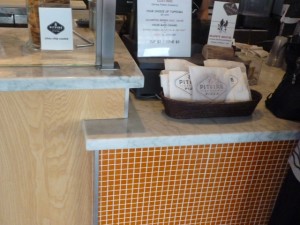 We had a fun time going to a place called the Pitfire Pizza. It was described to me by Tom, my brother-in-law, as the place where “all the hip young parents go in LA.” Not being that hip we were lucky as Tom and Erica were able to sneak us mountain folk in. Denise had a sandwich, I had a mini pizza, and AJ had their version of Mac and Cheese. 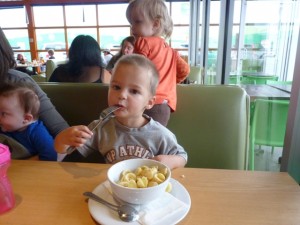 It was all pretty good but we had other plans as well.
The main event for the day was visiting the Getty Center Museum. There are two Getty museums, one in LA and one in Malibu. The Malibu is the older of the two, but the LA museum is by far bigger. I personally haven’t been to Europe and therefore have not visited any of the great European museums, but one day I hope to go and I hope it looks like this museum. The best part of this museum however is that it is FREE (something I hear is not like European Museums), except parking was $15 per car (talk about a case for public transportation). Tom’s goal was to get some good scenery shots, but as it turns out it was a cloudy day. It was huge and I didn’t get but to briefly file past it’s many exhibits. Here is a small video of what I did get to see:

In a lot of the areas I was not allowed to take pictures so Denise and I played our favorite museum store game: “Which is the best poster?”
This was Denise’s pick: 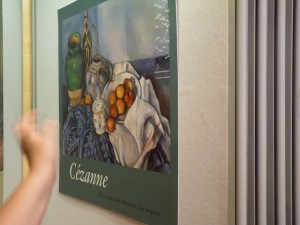 This was my pick: 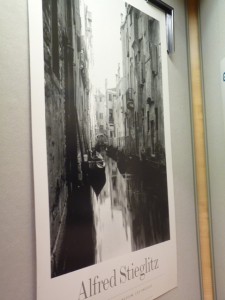 Not shown is AJ’s pick, which would’ve been the stone shaped crayons. Not really a art piece I know, but that is what AJ wanted.
Anyhow, we had a very fun day. If you haven’t done so already I encourage you to go to Tom and Erica’s blog and check out their photos of the day.