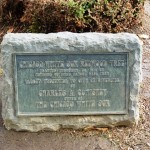 I find it kind of funny that the Chicago White Soxs would donate a redwood tree to Riverside considering you cannot grow a redwood in Chicago. Then again I find it even funnier that in a very unassuming corner of Riverside in a very small park called Low Park there is a solitary redwood tree growing. At the base of the tree you will see a small plaque dedicated by “members of that famous ball team.” Looking at this plaque my thought was many anniversaries are celebrated and many are almost forgotten. One of those almost forgot anniversaries just happened in Riverside. 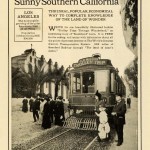 To understand why there is a redwood in Riverside dedicated from the Chicago White Soxs you have to remember California a 100 years ago. Riverside was a very different place back then. In those days California was coming out of its “old west” days, but it hadn’t quite gotten to it’s “Golden Hollywood” stage yet. Pumped with a agricultural boon, Riverside was starting to come into the money. To help this progression the City of Riverside paid $4,000 dollars (that is like $100,000 in today’s dollars) to help build a new electric rail line from Riverside to Rialto. This was done so that Riverside would now have a direct passenger line to Los Angeles (and you thought the Metrolink idea was new).

Building this new passenger line was tourist gold mine that Mission Inn Frank Miller couldn’t resist. Adding to this was the desire to build a major league ballpark in California. Using the opening of the new Riverside to Rialto line as a catalyst a big party was held in White Park. As part of the celebration a demonstration game between The Chicago White Soxs and the Los Angeles Angels, which at that time where a minor league team owned by the Wrigleys (another Chicago connection).

The game was a success and the plaque was born and money was raised to build Wrigley field in 1925. WAIT A MINUTE!!! WRIGLEY FIELD WAS FINISHED IN 1915 AND HAD NOTHING TO DO WITH RIVERSIDE!! And what you don’t know is that there were not one but TWO Wrigley Fields. WHAT?! Yep, there were two Wrigley Field baseball parks. 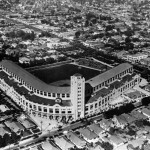 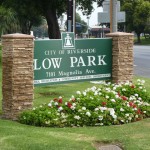 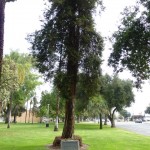