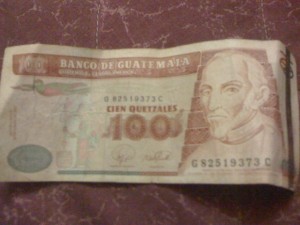 I never thought it would be that hard to get Guatemalan money.

So we arrived today in Guatemala City. I am happy to report so far we are safe and sound. We did however have a few bumps on the road getting here today. We arrived via the Aurora Airport in Guatemala City. Immigration was very easy. I saw all these money exchange places on the way to immigration and I was afraid that I was going to be charged for entering the country, but I wasn’t. So that was good.
What wasn’t good was the fact that the person I thought was going to be at the airport for us wasn’t there. My hotel reservation was mysteriously evaporated in the Internet and the hotel was now full. I didn’t fret, I had plenty of US dollars with and even though I didn’t like the exchange rate they were giving at the airport I thought I could easily change some US dollars to quetzales and I would soon be on my way. I tried going back in the airport the way I came out, wrong, that was only an exit. So then I told Denise to watch our stuff and I would go upstairs to the entrance. I get upstairs to the entrance and I was told you can’t enter unless you show us your passport. That was weird but I went with the flow and went back downstairs to where Denise was, got my passport, and then went upstairs. The guy let me in and I went to the money exchange place.

Strangely, all the money exchange places inside the airport were from the same company (and they all had a really bad exchange rate). I gave the guy 100 dollars and he told me if changed 200 dollars I would get a better rate (that still would have been a really bad rate). I told him I only needed $100 dollars and then he asked me for my departing pass. I told him I just got to the country and if I was about to leave I wouldn’t need any quetzales. He asked me when was I going to leave. I told him next week. He then said if I came back next week he would be able to change my money. All I can hope for is that he isn’t there again next week.

Luckily we were able to find a guy off the street who happened to be a licensed tour guide and he called a taxi from the center of the city who agreed to be paid in US dollars who then took us to a different hotel that we read about in a book we had. The hotel also took dollars and then the receptionist sent us to the pharmacy where I was able to use my ATM card to get quetzales (at a fair rate). I know that different countries do things differently, but I have to say a pharmacy would have to be the last place I would of thought of to get an honest exchange rate.