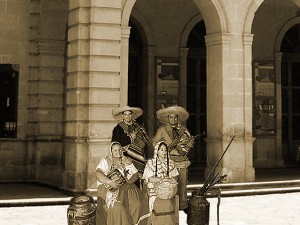 Myself Denise, and my cousins Eduardo and Claudia wonder what it would be like to be a revolutionary.

While we were in Aguascalientes we were able to learn a bit about the 1914 Convention of Aguascalientes. To understand the importance of this meeting you need to know a bit about Porfirio Diaz. Porfirio Diaz was the president of Mexico for 40 years (at that time there were no rules about re-elections). He was basically a dictator.

After announcing yet another run for the presidency in 1910 the Mexican people decided that 40 yrs. was too long for Porfirio Diaz to be in the presidency and started a revolution. By 1911 President Diaz had fled to France and Mexico was thrown into chaos. By 1914 a military coup had form and was running the government out of Mexico City led by a man named Victoriano Huerta. Another man named by the name of Venustiano Carranza decided this was just another run for a dictatorship and called up the meeting of all the revolutionary leaders to meet in Aguascalientes.

The reunion took place in October 1914. At this meeting they discussed the idea of term limits, provisional power, and integration of the militias into a regular army. Noticeably absent were Pancho Villa and Emiliano Zapata, who had gone on their own and captured Mexico City. This pretty much made the two leaders enemies of every other revolutionary leader which led to Venustiano Carranza and his army eventually chasing them down and shooting them.

Villa having a party on the Presidential Chair in Mexico City with Zapata.

Moral of the story: Meetings are still boring but if you are going to take over the Mexican capital you better have support or you are likely to end up with a bullet in your back. 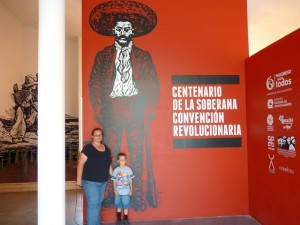 We learned all sorts of new facts at the convention museum.