This weekend we had a big storm up in the San Bernardino mountains. It dumped about 16 inches of snow, killed 3 people, and caused havoc on the electric system up in the mountain range. Normally, in this situation I would’ve just come home and hunker down, let the storm pass, and then slowly dig out. I had to be at work on Saturday so in this case hunkering down was not an option. Luckily I have a great mom and I called her pretty much last minute and she not only agreed to take me in but she invited all of us to stay with us for the weekend. 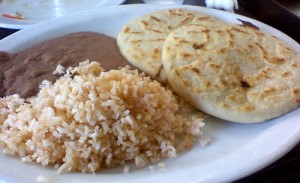 [rss-cut]
In a small token of appreciation we took my mom out to have pupusas.  Little known to my mom there was a Salvadorian restaurant right around the corner from where she lived. The star food from El Salvador are pupusas. Pupusas are basically tacos, but instead of being open ended they are completely closed. My favorite pupusa is made with cheese and locoro (a Central American herb type plant). They are generally served with a cabbage dressing called repollo. The restaurant we went to was called San Salvador (599 East Foothill Boulevard, Rialto, CA). It was very nice and had a very good atmosphere. For about $8 dollars you got two pupusas of your choice (my other pick was chicharron) with rice and beans. The only negative thing I had to say is there was only one waitress there on a Friday night and it was really busy. Other than that I thought it was a good value and it is always fun to try something different. 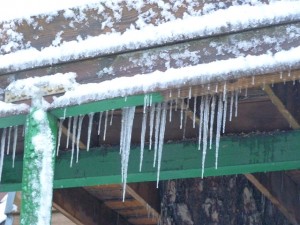 Speaking of things hanging around...

As fun as hanging out with my mom was all good things of course come to an end. We went to church in San Bernardino because church was canceled in Crestline due to the power outages. The drive coming up into the mountains was pretty good but once we came into Crestline we could start to see bits of snowy chaos. There were a lot of stranded cars and downed trees that I had to negotiate while driving. The other thing is when it is snowy I normally don’t drive down Lake Drive. I usually go down Crest Forest because the grade isn’t so steep, but that road was closed, so we had to go down the steeper road. 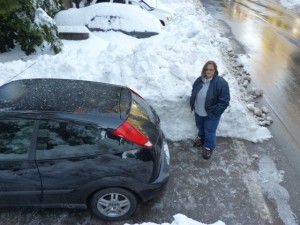 After we got the car in the berm was taller than Denise.

Slowly, but surely we made it home. The last thing we had to deal with was a big berm. The snowfall was 16 inches but thanks to the snowplows the berm was about 4 feet tall. It took me 3 and half hours but we did get the car in. Now, it is all about resting as much as I can because I have to go back to work on Monday. 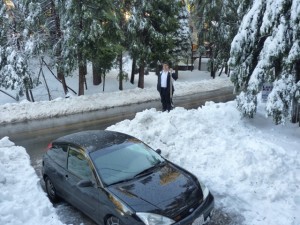 Triumphant over the snow berm.