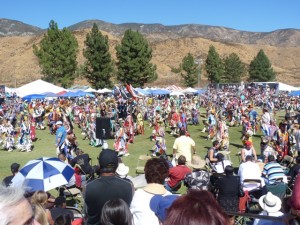 Every year at  my alma matter Cal. State San Bernardino the San Manuel Band of Mission Indians have a big pow wow. We have gone a few times before, it always makes for a fun day. Our favorite part is that of the parade of nations.

The first person to come in is the eagle staff bearer: 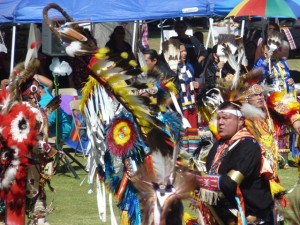 The eagle staff is like a flag and represents the native american nation (in this case it was San Manuel).

It is held by someone of honor from the community. After that comes the flag bearers. The US flag comes in first followed by the native american nation’s flag, and in this case representation from various armed services.

Along with the flags comes in the court of honor: 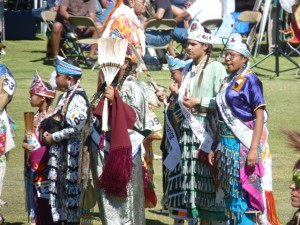 After the flag song come the fun part when all the dancers start poring into the arena. First come the elders, then the adults, then the teens, and finally the tiny tots. 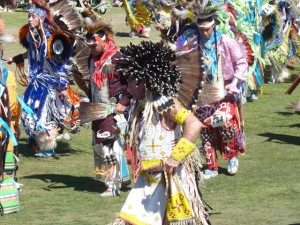 This particular pow wow had over 500 dancers so it took quite awhile. After watching the procession we went and checked out all the booths. My favorite booth is the fry bread booth: 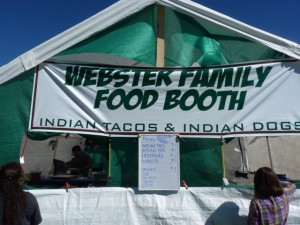 Webster wasn’t a very native name to me but neither is fry bread, so it is all good. Well, sort of is not Native American. What happened is back when the Native Americans were forced onto reservations they could no longer hunt and were therefore given rations of flour, lard, and grain. Making the best of it, Native American women invented fry bread. I call it a WAPAN (Weapon for Agressive yet Passive American Natives). It tastes really good, but it is loaded with calories (think fried donut on steroids): 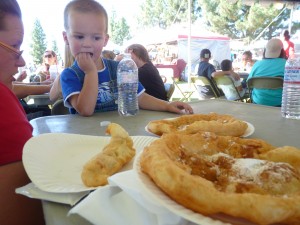 If that wasn’t bad enough, I was also introduced to an Indian Dog. Basically, it was a hot dog wrapped in fry bread, crazy.
As far as my links to Native Americans I have to say I have none. In fact looking at my ancestory it isn’t very politically correct that I even go to a pow wow, but it was ok because apparently Native Americans have a good sense of humor. As evidenced by these to pictures I took. The first one is of a little guy selling a cowboys and indian shooting set. 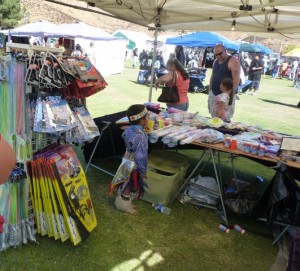 The next was of a t-shirt seller located right next to the food vendors. 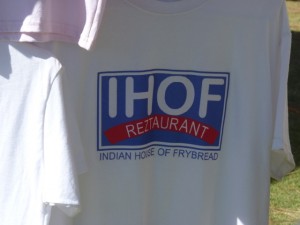 Anyhow, joking aside it was very fun, but it started to get very hot. 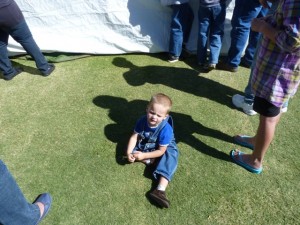 AJ gave us the “I wanna leave so I am not moving now” position so we knew it was time to go home. Anyhow, it was a very fun and cheap outing. All we had to do was pay for food, and that wasn’t that bad.