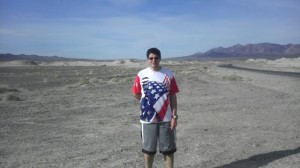 As I was running I kept singing in my head “I’ve been through the desert on a horse with no name, it felt good to be out of the rain…”

Last Thursday the RPD Baker to Vegas team went out to practice their legs in the race. For those not familiar with the Baker to Vegas race, it is a 140 miles relay race that as the name describes goes from Baker, CA and ends in Las Vegas, NV. The event is huge with law enforcement teams from across the nation participating.

Running in the middle of the desert was interesting. First of all, there was the matter of getting to the start line which is actually 21 miles outside of Baker, CA. The road I was running on was called Death Valley Road. Yeah, that’s right I was running in the middle of Death Valley. If that doesn’t sound insane, I don’t know what does. Amazingly, I did really good. I ran at a 8:01 pace which is the fastest I have ever run. Does that mean I am solar powered?

In other news the sugar busting challenge is seeing really good results. The first three days were hard with the sugar cravings. To make it worse they had a birthday party at work and I was handed the first piece of cake. Yeah, I can hear people now saying “oh you didn’t have to eat it” but it isn’t really that easy. There are definite social repercussions from abstaining. Not saying the benefits don’t override the negatives, but to not be aware of everything is dumb. In the end I ate a few small bites and then went back to work. In my line of work the social interaction is worth a few bites of sugar. Despite that minor setback I have been true to my challenge and the results are really good. I am down to 192.8 pounds (shorts, a t shirt, no shoes). That is 5.2 pounds in one week!! Can’t beat that. What is funny is with my anemia problem I have increased my calorie intake and I am still losing weight . As far as that goes, I just visited my doctor and things are going good. Still a little low on my Vitamin D and Iron levels, but the trend is getting better. The doctor says if I can get my Vitamin D level up higher it might actually help increase my metabolism and burn off more fat, so I am excited about that.