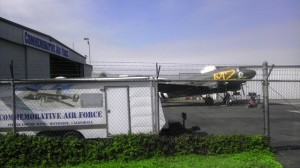 A paratropper plane makes for a great visual sight.

Did you know that there is not one but two air museums? It’s ok, neither did I until Friday. The March Air Museum is an impressive museum but it cost $10. Not too bad but if you ever want to see some historical aircraft for free than the Riverside Commemerative Air Museum is definetely the way to go.
Training for a marathon involves  lot of running. Running the same route day after day can get a bit boring so every once in awhile it is fun to divert off course. My normal route is straight down Arlington Avenue from Magnolia Avenue to Van Buren Boulevard. Roundtrip it is about 6 miles. 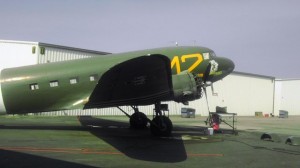 The D-Day Doll is the “Queen” of the Riverside Commemerative Air Museum.

At the museum I met a retired air mechanic named “Howie”. Howie gave me a small personalized tour of the museum and spoke to me abou the D-Day Doll. The D-Day Doll is a modified DC-3 paratrooper plane and is the “queen” of the Riverside Commemerative Air Museum. The D-Day Doll is a true WWII veteran. A C-47 (modified DC-3) she was rolled off the assembly line in 1943 and was immediately shipped off for D-Day invasion. After the war she was converted to a traditional DC-3 and flew for many years until she was retired in the 70s. Given up for all but scrap she was donated to the Riverside Commemerative Air Museum. They sent mechanics out to visit her, converted her back to a warbird, and got her ready to fly. These days she still takes air jumpers into the sky. 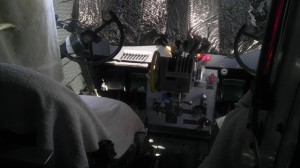 The controls on this old war plane were simple but that is the way they rolled back then. 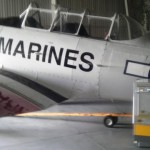 This Marine plane was used a pilot trainer in WWII. 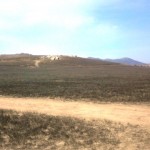 I imagine this is what California looked like in the early days of travel.

After I visited the air museum I decided to continue my run out to the Santa Ana River Trail from Van Buren Boulevard. Usually, I go to the right on the trail and head toward Mt. Rubidoux, but on this run I decided to go left and I ended up in place called the Hidden Valley Ranch. I didn’t find any salads, but the valley certainly lived up to it’s name. It is hard to believe that you can still find big open pieces of land like that in Southern California. Jogging the dusty trail it reminded me what it must have been like a long time ago when California was new.