So in less than a month now we will be in Guatemala for a trip that I think will be pretty epic. We are going to go hike in jungles in search of ancient ruins, ride power boats across a lake with a semi-active volcano, and if we are lucky even ride a horse along a cobblestone road. To do all that we are going to need fuel, which for us means food. I unfortunately don’t know a lot about Guatemalan food. Here in California we get a lot of Mexican food, El Salvadorean food, a little Peruvian, and even a tad of Argentian and Brazilian food. I didn’t think we had anything remotely Guatemalan in California let alone the Inland Empire. So not knowing much about the food in the region I started to look it up (Internet search mostly). Then I saw some very strange commercials about how Guatemala is going multi-national by exporting fast food chicken with a company called Pollo Campero.

I have to say fast food chicken is not what I think about when I think about Guatemala, but the name kind of got stuck in my head. I kept on saying to myself “I have heard of this place before” it was almost like I had seen this place often. How this could be I didn’t know, because I have never been to Guatemala. Then one day while I was going to Best Buy (a place I am know to frequent often) and I saw it. It was right across the street! 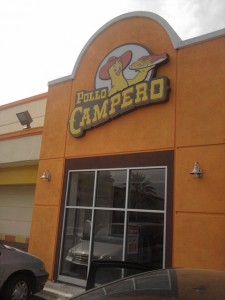 I knew I had seen this before.

I had never given the place much though before, but once I knew it was Guatemalan I knew I had to go. Kind of funny, there are 38 of these places in the USA and I had been staring at one all this time. 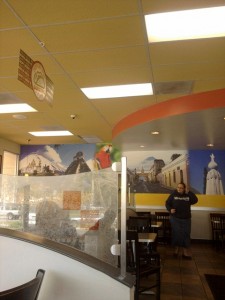 The inside reminded me a lot like El Pollo Loco. It was very clean and it had that signature salsa bar I am used to at all Mexican chicken places. Some things were the same at the salsa bar like chopped onions and cilantro, but other things were not. The big difference there instead of things like Pico de Gallo and Salsa Verde that I am used to I saw different sauces that were not labeled so I had no idea what they were. I just scooped them up and hoped for the best. They had a lot of things on the menu that wouldn’t be any different from a KFC like fried chicken, french fries, mac and cheese. I however wasn’t there for something that I could get at KFC so I ordered the grilled chicken, yucca fries, and sweet plantains. 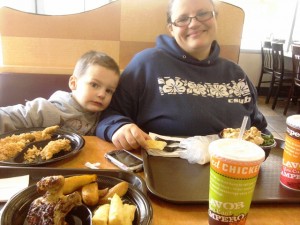 I think AJ was thinking "what the heck are they going to make me eat next?!"

It was definitely different, but it was good. The chicken was really moist and the blend was salty and had a defining citrus taste to it. Mostly lemony but I could of sworn I could taste a hint of orange in there. The yucca fries were different, a lot like french fries in taste but lighter. Speaking of lighter, I got a nutritional guide and my entire meal was only 600 calories and that included the 4 corn tortillas that I ate on the side. It was also reasonably priced, the three of us ate for $19.00 USD, but we didn’t get try any of their desserts.
Anyhow, it was a fun alternative to our normal chicken adventures. If you are ever in San Bernardino and you ever find yourself at Best Buy try going across the street for lunch, you might like it. Oh, and if your wondering why this is part one it is because we are planning on visiting Pollo Campero in Guatemala. It will be interesting to see what is the same and different there as well. If anything this little visit taught me, it was that I still have a lot to learn about Guatemala.