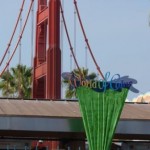 On Monday June 14th, we went to Disneyland for the last time on our Disney Premium passes. I have been a Disney passholder since 1999. Back then you could get a annual pass for $99 dollars. There was only one pass and it was good all year long. Over the years Disney passes have steadily gone up in price and now it cost $419 for a Premium pass (the pass that lets you in year round).

Sorry for this long trip report, but it was our last time for at least a year. If you want to see more of picture click on it to expand it. 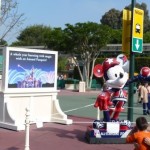 AJ will turn 3 this year and so he will now have to have a ticket to go to Disneyland. So if we got three passes that would cost us $1257. We could afford that if we wanted to, but then we would have no budget to do anything else. There are lesser passes like the So-Cal Pass, but I work during the week so that doesn’t really work for me. Plus, there are too many other fun and interesting things to do here in California than just Disneyland. We plan on going to Disneyland once a year from now on. We will pick a day when we know the crowds will be down and then do what we call a “commando” day.
Anyhow, since it was our last day at Disneyland, we decided to do it the right way. This meant doing as much as we could with what we had. What we have is a two year old, so we knew we couldn’t do everything, but we knew we could do a lot. 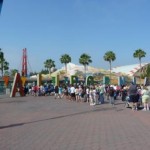 The first thing we did was to go to Disney’s California Adventure (DCA). We were there right as it opened and immediately got in line for the World of Color fastpass line. The line was very long. The fast pass machine was at the Grizzly River Rapids, but it switch backed through out all of Condor Flats and by the time we got in the line we were in front of Soaring over California. Anyhow, since we were in front of Soarin of California, I got us a fastpass for that attraction. We only got one because we knew that we could turn it into two with a baby swap (it’s a front of the line pass you ask for when one of your party is not tall enough to go on a particular ride). 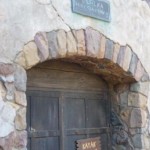 I went back in line to wait and Denise and AJ went on King Triton’s carousel. By the time they were done with their carousel ride I had gotten our World of Color fastpasses and the Soarin Over California fastpass was ready to go. 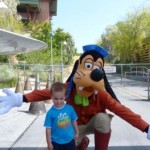 On the way to Soarin Over California we got a family picture with Goofy. Denise then went on Soarin and I got a baby swap ticket. TIP: Baby swap tickets don’t have times on it so I put it in my pocket and saved it for later. While Denise was on Soarin Over California AJ and I got a picture with the Mater and Lighting McQueen cars. We also went over to the Animation Academy. We then went as a family to see Playhouse Disney Live. AJ thought it was interesting, it was fun for him because he likes to wiggle. After Playhouse Disney Denise and AJ went over to Disneyland and I went on Soarin Over California. While I was on the ride Denise and AJ got a fastpass to Space Mountain got a spot at the Pizza Port for lunch. After my trip on Soarin Over California I went to Disneyland and went on a horse drawn trolley ride up Main Street. I also went into Adventureland and got a fastpass for Indian Jones. I then met up with AJ and Denise at the Pizza Port. After lunch we went to see Captain EO.

After the show, we took the train over to New Orleans Square. TIP: Because it is hidden behind the Autopia attraction, the Tommorowland train station is generally the least crowded of the four stops (the most crowded station is always New Orleans station). After checking out the Grand Canyon (present and past), we visted the Tiki Room and then took a spin on Pirates of the Carribean. TIP: If you want a Dole Whip go see the Tiki Room and buy it from the Tiki Room side, you will get a cool treat for half the wait time. At this point we perused some of the more interesting shops of New Orleans Square (most Disneyland shops sell the same stuff but New Orleans Square does have some variety). At this point we parted ways again and I went to see Indiana Jones. Denise and AJ went on Sleeping Beauty’s carousel (the carousel was the only ride AJ specifically asked for, so we felft we should oblidge) and Goofy’s Bounce house in Toon Town. 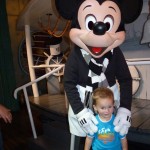 I met them back at Goofy’s Bounce house and then we went on to see Mickey at his house (and took the obligatory picture). TIP: Mickey Mouse can be hard to find sometimes in the park, but as long as Toon Town is open, you can find him in his house (that mouse is really quick on those costume changes!). After visiting Mickey we were getting tired so we took the Monorail to Downtown Disney. We looked at the mall shops for a few minutes and then went to rest in the Grand Californian. TIP: In order to avoid crowds late afternoon is generally a quiter time to visit the Downtown Disney mall area. Even if you are not staying at the Grand Californian it can be a great place to rest, especially if you are visiting DCA. 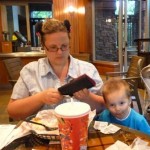 We went to this little cafeteria place inside the Grand Californian called Whitewater Snacks for dinner. It isn’t anything special, but we like it because it is close to DCA. It is also close to the Grand Californian entrance into DCA but because the park was so crowded, they were only letting hotel guests use the side entrance. After walking back around we went through the Blue Sky Cellar. This is not really an attraction, it is more of a showcase of things Disney Imagineers are working on for the future. We were excited to see the ride vehicles for the Little Mermaid and the new Luigi Bumper Tires. Soon it was time for us to go see the World of Color show. 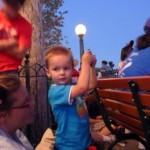 While we were waiting for the show to start AJ was a crack up. He quickly noticed everyone using their iphones taking pictures. He grabbed my itouch and took his own “pictures.” He was having so much fun that we didn’t have the heart to tell him an itouch doesn’t take pictures. 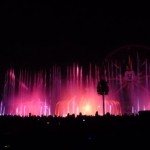 There was a little pre-show before the main show:

The show itself was awesome. The music, the water jets, and the special effects make it a spectacular show. 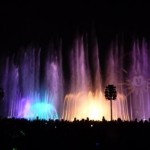 It was amazing to see how high some of those jets went. I wasn’t going to sit there and film the whole show, but here are some teasers (in HD):

After the show we took the side exit back through the Grand Californian. We wanted to take the Monorail back into Disneyland since we still had a fastpass for Space Mountain. Unfortunately, it was down, we asked what was wrong and they said it was “technical dificulty.” Not uncommon, so we walked up to the front entrance of Disneyland. It was very crowded, but I still didn’t think much of it, I thought with DCA closing it was just because everyone was going now into Disneyland, plus the fireworks show had just ended and that makes Main Street very crowded. AJ by this time was asleep in his stroller so Denise decided she wanted 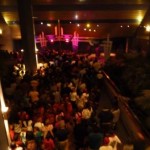 to go window shopping. I still wanted to go on Space Mountain so I fought my way through the crowds to Tomorrowland. TIP: If Main Street is really busy go through the shops on the sides, they all connect in the back and are usually not as crowded. When I got to Tomorrowland I could tell something was wrong. None of the rides were operating. After asking a few other guests what was going on I found out that there had just been an earthquake. Anyhow, after a quick reset and test, we were allowed to go on Space Mountain. I was really glad I had a fastpass. After Space Mountain we made the slow walk to the trams and then up to the Mickey and Friends parking lot. TIP: At night the trams see if the trams are running on both sides. If so, go to the right (so that you are right next to the wall of Disneyland), it is always a shorter wait. 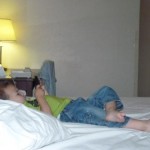