“We found on our journey, as well as in the place where we stopped, that they treated us with as much confidence and good-will as if they had known us all their lives.” – Junipero Sierra 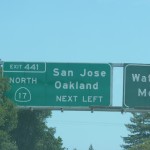 Do you know the way to San Jose? I do.

Driving back up to Fremont, CA I was very tired. Lucky for me I had Denise driving. When it comes to these crazy road trips Denise is ever the trooper as she supports me in my crazy ideas. There was many thoughts as we pulled up to Mission San Jose, I can’t name them all but the most prominent thought was that of the support of my beautiful wife. 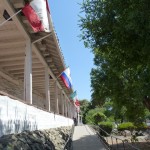 The flags tell the tale of the many nations that have claimed California.

Entering the mission of San Jose you are greeted my the flags of those who have claimed California as their own. A testament of the ever changing nature of California, the constant of the unique mission style architecture provides a very tangible visual of California’s rich historical heritage.
The San Jose mission is a very typical California mission in that it was designed in a quadrangle style with the church taking over the main corner. Like most missions it fell into ruin and was even replaced at on point with a gothic Irish church named after St. Joseph (it even had a statue with a green clover). 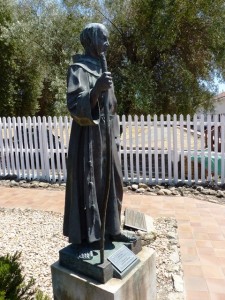 After seeing all 21 missions I would like to say I had a profound experience but immediately leaving the mission I was confronted with a crazy man who had a very extensive repertoire of profanity. Completely uninspired by the environment I do remember thinking of the statue of Father Junipero Serra in the rose garden of the mission. I think there is a replica of this statue at every mission, it was certainly not the first time I had seen it.

The day of the California missions has long faded away. Save a few 4th grade projects I would venture to say few remember or care about the missions. The buildings as interesting as they are did not in and of themselves inspire me to visit all of them. What drew me to the missions was the spirit that created them. The vision and story of a man who wanted to be and became more than what he was. Father Junipero Serra was really just a bureaucrat (something I can relate to). He didn’t know anything about agriculture, he never built a building, and did not come from money. Yet somehow, someway he had a vision and got others to no only see that vision but help him become a reality and that is something I can respect and admire.