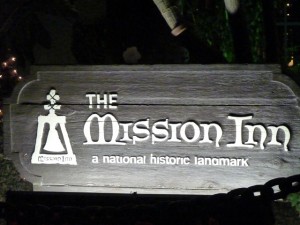 Look! It’s a national landmark!! See the sign tells you so! You must go, go now and spend lots of money on sales taxable items!
Just kidding, except for the part about the Mission Inn being a national landmark. Not sure exactly why it is a national landmark, but it is (really). The reason why I am not sure is because the Mission Inn is not really a mission, never was, never has been. It wasn’t even always an inn, it used to be a boarding house, then again that was way back in 1876. In 1902 Frank Miller changed the name to the Mission Inn and it has apparently been historical ever since (amazing what a name change can do!)
Most people would call the architecture of the Mission Inn as Mission/Spanish Revival, but I like to think of it more as late Winchester House Style. The place is pretty interesting, there are no blueprints to the place and not even the owners know how many rooms are in, and as if to fit the mystery, the City of Riverside starting in November decorates it with a seemingly endless amount of lights for the Christmas season.
This is where we come in. As you probably read in my earlier post we recently went camping at Jurupa Valley Regional Park. When we got there we quickly set up camp, we cooked dinner, and then we discovered something. We discovered that without WIFI we get really bored in the dark. Fortunately, we knew that in Riverside they have a citywide WIFI network, and it’s free!! Well, sort of free, they do have ads… Anyhow, we went to downtown Riverside and to our amazement parking was really bad. Now, if it was during regular business hours, we would of expected this of downtown Riverside, but at 8PM this was rather suspicious. 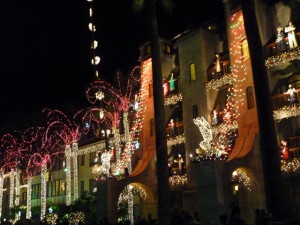 Then it dawned on us (yes, just light a little light bulb going off), we were there for the Festival of Lights (the day they turn on all the lights). It was crowded, I don’t recommend you go on the day they turn on the lights. Although if you go any other day, and especially on weekends, you can have yourself a pretty good time looking at all those lights. 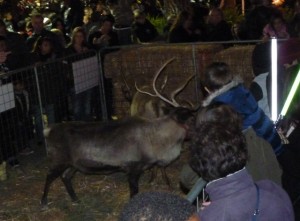 In addition to the lights there are other things you can do such as ice skating ($13 dollars per hour), go on a carriage ride (about $10), take a picture with Santa (about another $10 bucks), eat freshly baked treats (let’s just say it isn’t free), or look at real reindeer (their free, but they have a tendency to stare at your wallet). 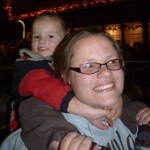 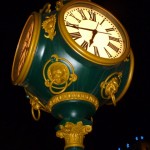 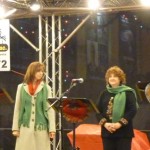 The lights are very fun to look at, and even though we picked the worse day to go (any day other than the lighting ceremony is a good day), it was still a fun thing to do. The lights stay on until January 2nd. Hope you get a chance to see them. 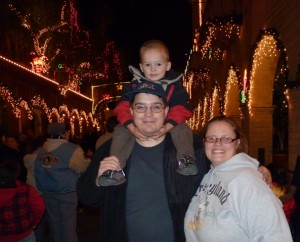