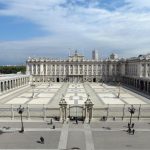 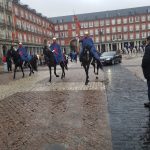 The King of Spain making his commute the office (the palace) in the Plaza Mayor. 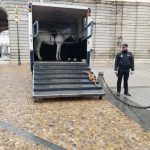 If you see a patty wagon in Spain it might just be carrying the King’s horses.

Our first day in Spain we were anxious to go to the Royal Palace. It is the capitol of Spain. There is a prime minister and an assembly hall that holds the real power, but there is no doubt that the Palace is the head of Spanish life. From it flows the power of Spain. Spain has in the past (and currently) had a rocky relationship with it’s royalty but they have never been willing to completely give it up. 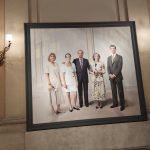 The Royal Family. This is actually a painting. King Felipe VI is on the right. 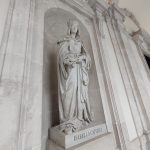 Queen Isabella who in 1492 sent Christopher Columbus to sail and kicked out the Jews. 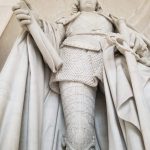 This is a statue of King Ferdinand of Spain. The detail of his body armor in stone is amazing.

To understand the Madrid Castle you kind of have to go back to the 2nd Century. Back then Spain was called Hispania and it was firmly under the control of the Romans. The Romans however started to decline in the 5th Century and the Visigoths (ancient Germans) took over and established a Capital in Toledo (not too far from Madrid). The Muslims however, came up from the north and crushed the Visigoths and established a caliphate on the whole Iberian peninsula. They established a big fort called an Alcazar in Madrid. This happened in the 8th Century and the Muslims had what was called La Convivencia. The deal was OK, you had to obey the Muslim laws and they tolerated your non-Muslim religion. Probably a big mistake because the Christians were rebelling and in 1083, they took over Madrid. The war went back and forth, but by 1492 King Ferdinand (Fernando) and Queen Isabella had kicked out the Muslims from Spain, and since they were in a kicking mood they also kicked out the Jews. Basically you had to be Catholic or you were dead. In 1561, King Felipe II decided Toledo was too small and built his new castle on what was the old Alcazar, which was also part of the Roman empire.

The Royal Castle of Madrid has been growing ever since and now stands at 3,418 rooms. The rumor is there might be more rooms, but no one has ever visited all the rooms on the map, or even looked for extra ones. Even recently when they refurbished the war rooms, they found extra rooms, so that number is kind of more of a number of “discovered” rooms. Entrance is relatively cheap at 13 euros. If you are Spanish or from one of Spain’s conquered countries like Mexico, Philippines, Dominican Republic, Central America, South America, etc. there are days set aside that you can get in for free. I feel like there should be a t-shirt that says “I was conquered, but hey, I got a free tour to show much was taken from me.” It is just a small side jab, Spanish people are great even if their past leaders were not so great. 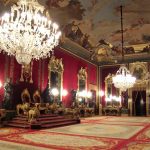 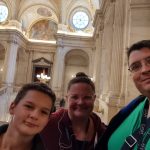 In the grand staircase. 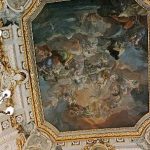 This is a fresco by an artist named Giaquinto. 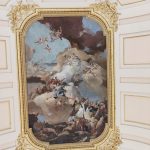 This fresco is by Tiapolo and is called Venus and Vulcan. It shows Venus telling Vulcan to forge weapons for Aeneas so he can conquer Rome. 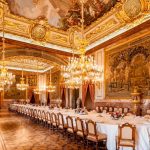 This is the royal dining room. They have these shields that show the conquered colonies. 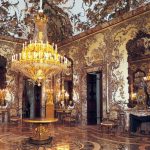 If the royal family is not using the castle the self-guided tour is pretty amazing. You will walk through many of the most important rooms. The one I found the most fascinating was the throne room and the gasparini room. They are really over the top. The entire castle is commanding and shows off the greatness that was Spain. 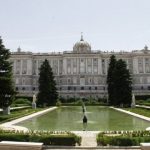 To the back of the Madrid castle is the Sabatini gardens. They were finished in the 1970s in a space that used to be where they kept the horses. Sabatini was an Italian born architect that was responsible for some of the most commanding architectural designs in the castle including the grand staircase. The Sabatini gardens are free to enter and provide a nice quiet place in a busy city to sit and reflect (complete with reflecting pool). There are statues of all the past kings. For me it was a great place to get some ham, cheese, and bread and have a little picnic.