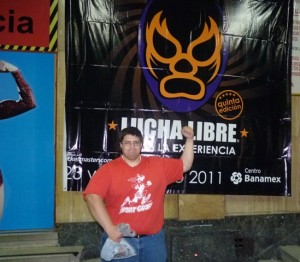 This poster was in front of the Arena Mexico advertising Lucha Libre "The Experience" a new museum exposition.

Despite having lived in Mexico City for over 4 years I had never gone to a Lucha Libre (Freestyle Wrestling) match until I went this last Tuesday. When I was a kid I was really into the WWF (World Wrestling Federation) and saw many matches in the United States, but as I got older I just kind of grew out of them. Freestyle wrestling of course has never gone away and thanks to movies like Nacho Libre has started to gain a sort of cult following among foreigners here in Mexico City. 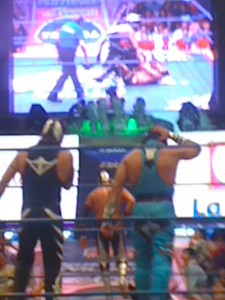 These losers were watching their loss on the jumbotron.

Arriving at Arena Mexico (one of two wrestling rings in Mexico City) I was surprised at how many foreigners there were. I was later to find out that the reason for this was that the night’s program was titled “CMLL (the Mexican Wrestling League) contra (against) Los Invasores (the invaders)!” 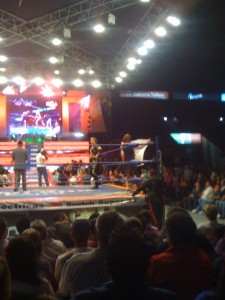 One of the invaders was a Japanese wrestler named Okumura. 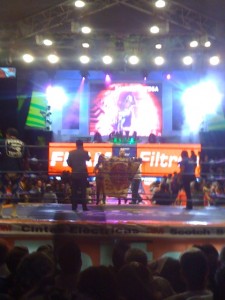 This wrestler was named Sangre Azteca (Aztec Blood) and was extremely popular with the crowd.

Lucha Libre at first might sound kind of dumb, but strangely enough I think it has a very deep cultural significance to Mexicans. It all goes back really to the ancient days when the natives used to play ball in the ball courts (go to almost any pre-Hispanic ruins and you will find a ball court). Whenever the tour guides explain the ball courts they never fail to tell the visitor about how the loser got sacrificed to the local god, but what they do fail to talk about is the pageantry that went on during these events. These weren’t sporting events, these were competitions in which life and death was on the line. The outcome of these events often decided the entire political structure for years. They were big events with costumes, fires, and displays of strength. All meant to intimidate and show the other team how strong they were. 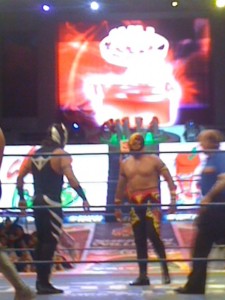 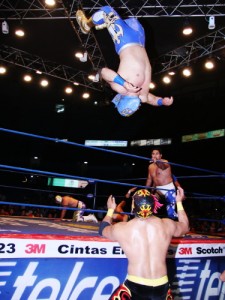 Watching Lucha Libre is a akin to watching circus acrobats.

In choosing when to go I picked Tuesday because it is the cheapest day to go. The cheapest seats in the house go for about 35 pesos (3 dollars USD). For a 6th row seat I paid 84 pesos (a little less than 8 dollars). The big day in which they have the championships is Friday, but then the price more than triples to 300 pesos for a 6th row seat. You can get a closer seat for only two dollars more, but before you run out and buy that front row seat you need to realize that due to the acrobatics involved it is not uncommon for Mexican wrestlers to fly into the spectators laps. There are no barriers between the wrestlers and the spectators. Along that line don’t try to get into the ring. The wrestlers have no qualms about pile driving (a move that involves getting your head smashed into a floor) an unwelcome visitor. 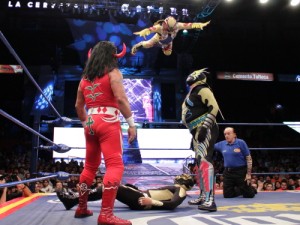 This midget was with the rudos in the last match and every time the refree wasn't looking, they would throw him into the ring.

As much as it sounds violent Lucha Libre is actually considered a family oriented event in Mexico City. From babies to women who I think where in their 70’s it was amazing to see the spectrum of people at the stadium. You haven’t seen hilarity until you see a lady in her 70’s stand up and yell with all her might for her hero to “Murder” his rival. 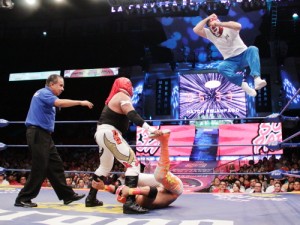 The guy on the mat about to get clobbered won because the guy about to land on him wasn't supposed to be in the ring.

Perhaps one of the most interesting aspects to Lucha Libre is the masks. Not all Mexican wrestlers wear them, but the majority do. The masks are almost always very colorful and flashy. Also, if you don’t know much about the wrestler it becomes an easy way to find out if he is a “Tecnico” (good guy) or a “Rudo” (bad guy). Like a comic book hero the goal for every masked wrestler is to never reveal his secret identity. In one of the matches we saw a wrestler cheated by getting a friend to illegally help him and once he was done pulverizing his rival he ripped off the guy’s mask. The maskless wrestler won by disqualification, but ended up putting a seller’s apron on his head so no one would see his face. 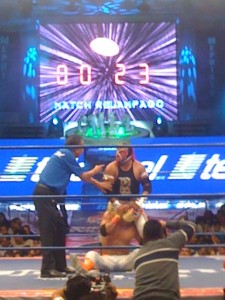 In this lightning round this wrestler got his mask pulled off.

Lucha Libre is silly, but it is a valid part of the culture that makes up Mexico City. The days of the bloody ball courts are over. Gone are the days off sacrificing the loser to the gods, but the spectacle of what went into those events is still alive in Lucha Libre. 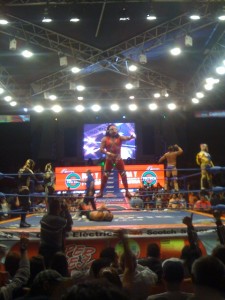 The winners of the last match were rudos named Mr. Aguila, Psicosis, and Alebrije (a mythical creature from ancient times). Even though they won the crowd was still made and called them Turkey Man (Pavo Flaco), The Rotten Cow (La Vaca Malecha), and The Pregnant Butterfly (Mariposa Embrazada).