Denise and I have this running debate about eating out. Basically it goes along the line of Denise and I like going out to eat, but we disagree on whether there should be a waiter. I like having a waiter, it can make or break a meal. Denise however does not like a waiter, she thinks they drag out the meal and just make the final tab higher. For the most part when we go out Denise wins because lets face it, price usually wins. Sometimes however it does not, and Kickback Jack’s is actually a good example of that.

First of all I have to say we we went to Kickback Jack’s on a Groupon coupon which means our final tab was 15.75 (which includes what we paid to groupon and our tip). Even without it however I still think we could of beaten most counter service locations. Speaking of locations, they have two: one in Claremont and one in Rancho Cucamonga. We went to the Rancho Cucamonga location. It was an interesting motif with a caribbean bunny thing going on. 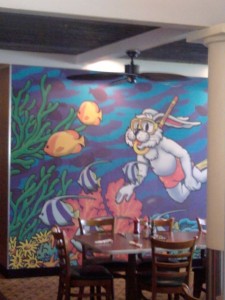 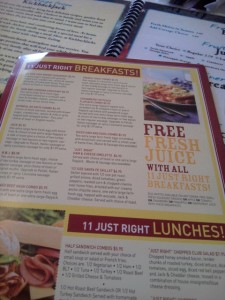 According to the just right menu the portions are half of the regular menu items. When I ordered I was afraid it wasn’t going to be enough, so I also got a peanut butter and chocolate milkshake. I ordered the jack special that came with one pancake, one egg, two sausages, and thin cut potatoes. I was worried that it wasn’t going to be a lot of food, but it was huge. So big that I wasn’t able to finish my potatoes (but I did finish the milkshake). It was good too. I only got one pancake, but it was about the size of two Denny’s pancakes. It was fluffy and had a hint of vanilla in it. Denise had a chicken and cheese baguette sandwich. I had a bite of it and it was good as well. 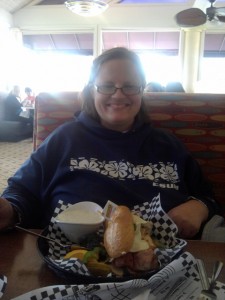 The only down thing I will say about Kickback Jack’s is that the service was kind of slow. It took us awhile to get a table, but that was understandable because it was really busy, but even after we got a table it took a long time between when we ordered and got our food. Two of our original menu requests were not available). Another weird thing was that the menu had a lot of advertising on it, didn’t bother me too much because I just didn’t read those pages, but it was still weird. Despite this our waitress was very attentive and she did give us a free order of homemade potato chips for our wait. 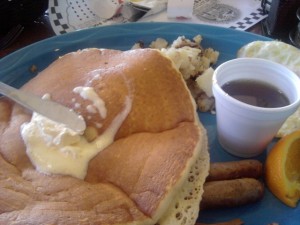