↓
Home→Crestline→He’s got legs, and he knows how to use them… 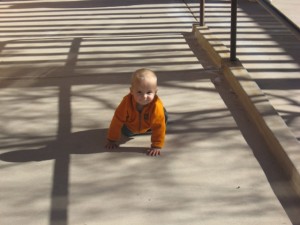 Apologies to ZZ Topp, but they have a good song to describe AJ. He is not much for using his arms. Mostly arms are just for getting his hands to his mouth or so he can hold up his hands and stare at them. However, the legs do all sorts of things, none of which include standing or walking, just yet. If he’s really happy his legs kick together. If he’s upset they kick strongly, but out of sync with each other, like he’s peddling an imaginary bike. Lastly, if he’s indignant both legs stiffen, along with the rest of his body. He does enjoy “”bouncing”” in my lap, and it’s just a matter of months before he becomes more mobile.

In other news John received news that he passed his comp exam! Yeah! That’s one major requirement that can be checked off. The last main requirement is the two classes that finish in a week and then the last two next quarter. There is also a requirement of a portfolio, made up of papers completed in other classes. We may survive this MBA thing yet. “