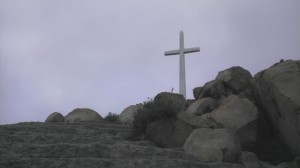 Will the cross remain?

In 1838 the Mexican government gave what was then known as Mount Pachappa to a man named Juan Bandini. In 1847 a man named Louis Rubidoux established a ranch called Rancho Rubidoux and renamed Mt. Pachappa to Mt. Rubidoux. In 1906 Frank Miller, the owner o the Mission Inn, along with Henry E. Huntington and Charles E. Loring, formed what they called the Huntington Park Association and purchased Mt. Rubidoux. In 1907 after completing initial improvements to the mountain (a road and very large cross), the top was  dedicated to Father Junipero Serra (of the famed California Missions). In 1909, the first Easter sunrise service was held at the top of the mountain. The tradition grew and other things like the 1925 Peace Tower were soon added.Wanting to give a gift back to the city, in 1955 the heirs of Frank Miller gifted Mt. Rubidoux to the City of Riverside. Their were only two caveats to the deal: the land had to always remain open to the public and the cross had to stay. 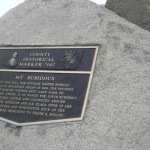 That of course is all history, fast forward to today and Mt. Rubidoux park is a wonderful park enjoyed by all of Riverside. With a city improved trail one can enjoy many miles of trails. Climb to the top and you can go right up to the cross, and if you can survive the wind enjoy a full 360 degree view of Riverside. You can still bounce along the  Peace Tower bridge. Or, my favorite thing to do, race down the hill at full speed. At least you can still do that until Thursday.

On Thursday, April 11th, Mt. Rubidoux will be sold to the highest bidder at auction. About a year ago the ACLU threatened to sue the city because they said that the cross on top of Mt. Rubidoux was a threat to religious freedom. This is the first complaint in the 60 years of the cross’ existence and the letter came from Virginia. Times being how they are the city has no money to battle the ACLU, so the decision was made to auction the site rather than to have to risk a lawsuit. 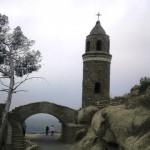 A nice view of the Peace Tower and bridge.

A group called Totally Mt. Rubidoux is trying to raise funds to keep the site open and the cross intact. I commend their efforts, but it is difficult to say what will become of Mt. Rubidoux after Thursday. With that in mind I knew I had to make a trek the mountain one more time. Once again I took the curvy road up to the top. I stood at base of the cross, felt the wind rush by me while I watched Riverside slowly awake on a Saturday morning. As I came down I read each one of the many dedicatory plaques memorializing the people and events that make the history of Mt. Rubidoux. I passed under the Peace Tower bridge. I ran as fast I could down the mountain. It was fun, I got up to a 5 minute mile pace! 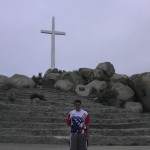 I had to make sure I got to see the cross one more time. I wonder if in the future it will be there and if so will we still be able to go all the way to the top.

As I passed by the park gates at the bottom I paused for a moment looked back and wondered if I would ever be able to do that again. Things I suppose have to change. Sometimes it is good, sometimes not so much. Hopefully, the top of Mt. Rubidoux stays open, but that cannot be guaranteed.I have hope the cross will stay on the mountain and I know most of the land will remain open to the public. What I don’t know is if the cross will stay and if it does stay how much access will be granted to see the cross. Will we still be able to touch the cross? Will we still be able to cross the Peace Tower bridge? It is good however to hope and it was good be able to see the cross one more time. I just hope it isn’t the last time.

Speaking of hope and change I do have some good news of change. That of my continuing weight loss. I weighed myself in on Saturday and I was 192.2. That is 5.8 pounds from when I started this new sugar challenge. Not as much weight loss this week, but my body fat is down to 20% (it was 21 percent last week), so I am confident the fat is starting to burn. I had to stop the Vitamin D supplements. My body broke out in hives, I think it was from Vitamin D toxicity. Even though I have been able to keep up my challenge it has been hard. Mostly it is awkward. We were invited over for dinner the other day and for dessert everyone was having lemon meringue pie and I was eating a mango. Although, I believe in follow through so I am sticking to it. I am confident in the outcome, so awkwardness or not I will continue as planned.

UPDATE: Totally Mt. Rubidoux won the bid. They bought the park for $10,500. The good news is that their plans include keeping the park open. How they achieve that is going to be interesting, but rumours have it that they have raised $300,000 in a trust fund, so that should be a great start.