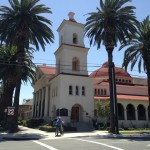 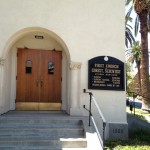 A view of the door and cornerstone.

Construction on the First Church of Christ Scientist began in October of 1900 with the laying of the cornerstone at Lemon St. A few months later in February of 1901 the church was completed with the first services being held on February 24th of that year.

Christian Science was founded by Mary Baker Eddy in 1866 and is currently headquartered in Boston Massachusetts . The church is known for its emphasis on using prayer and study for healing, arguing that sickness is an illusion that can be helped by prayer. In 1887 Emma Stanton Davis, a student of Mrs. Eddy moved to California and started the work of the Christian Science Church in Riverside. After holding church services in various locations (such as the YMCA, Odd Fellows Hall, and the Universalist Church), it was decided they needed their own place. 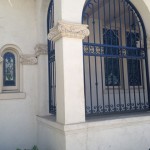 A sneak peak at one of the stained glass windows of the church. 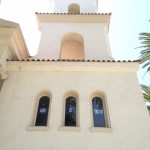 The tower from the church. Proclaiming God is Truth. 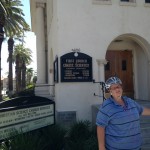 Denise in front of the church. 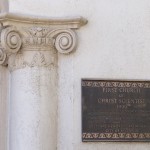 A close up of the landmark plaque. 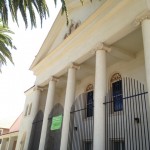 A view of the church columns.

A view of the church from Lemon Street. 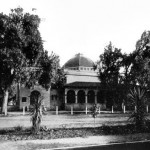 
The building is a Mission Revival style that designed by Arthur Benton from Los Angeles. Arthur Benton is also noted in Riverside for having designed the first phase of the Mission Inn. The building architecturally has a lot of interesting features in that it has a classical façade that features towers and columns.