This weekend we went and visited Denise’s brother in LA and we took a little excursion to the Grove and the LA Farmer’s Market. The grove is a trendy outdoor mall area with all of the usual mall type restaurants. When we were there they were filming a commercial for Guitar Hero. I guess they are making a portable version for the Nintendo DS system, because that is what they were using. I don’t play many video games so it wasn’t that interesting to me. Denise went to a cooking store and bought a bunch of mini-loaf holders that she plans to use for Christmas gifts. AJ of course had a knack for finding every potential scar inducing device in the store.
The Farmer’s Market was really interesting. I first learned about the LA Market from an episode of California’s Gold. It once was a big gas station and it is now celebrating its 75th anniversary. It is very interesting in that it has lots of little booths you can go and look at. On the episode of California’s Gold I learned about this Singapore food place that served food on banana leaves so we went there. I had the medium spicy level noodles called mee-goreng and they were just at my tolerance level, I don’t want to imagine what normal or high spicy would be. 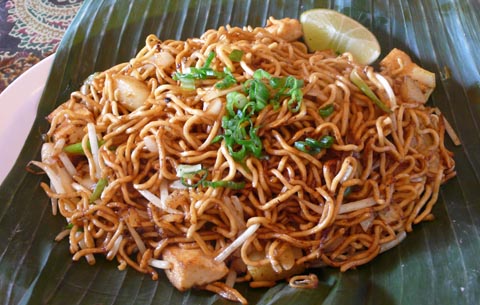 Denise bought some really good peaches. Fruit has been a hard thing for me to buy these days. Ever since I have discovered farmer’s markets I only want really ripe fruit. It makes a really big difference when the fruit is allowed to grow to its full duration. The only problem is that the fruit at farmer’s markets is expensive and so I don’t get to eat it that much.
Also in LA we went to this little Japanese strip mall for yogurt and at the market I bought some Japanese soda called Pocari Sweat and Calpico. Here is what AJ thought of it:

Oh and AJ got a haircut today! 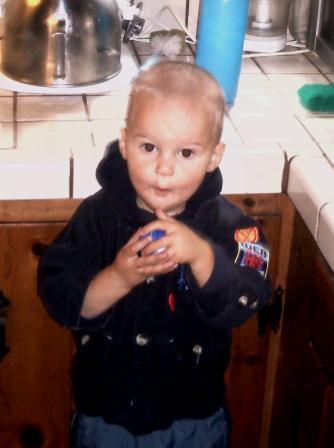 I am ready for my close-up now!