To understand this story you need to know that Denise really likes shopping at this Spanish grocery store called Cardenas. Denise primarily likes going there because she knows she can get good deals on produce. Only problem is she can’t often read what she is buying because it is mostly in Spanish. Anyhow, so she comes home after shopping and she tells me “I bought this cool spider bread!” I thought to myself, what the heck is she talking about?!

So I tell her “What are you talking about? Mexicans don’t eat spider bread.”

She responded “Oh yes they do, what is that word for spider again?”

I am now really intrigued, because I know that there is nothing in the Mexican language that starts with C and has anything to do with a spider. So I respond, “let’s see this spider bread of yours.” So she shows me this: 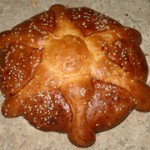 It immediately becomes clear to me and I say, “you didn’t buy spider bread, you bought Calavera bread.”

“Calavera means skeleton, it’s supposed to resemble a skelton head and bones,” I say. I further explain to her that this traditional bread is supposed to be an offering for the dead and that people typically eat it as part of a picnic at the gravesite of a loved one that has passed on.

“Well, it looks more like a spider, they should call it spider bread,” Denise responds.

Long story short soon most of the bread was gone. 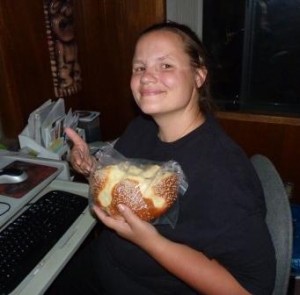 Naming rights aside, we both agree that it was a nice treat. Happy soon to be Dia de los Muertos!