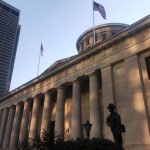 The Ohio State Capitol looks a bit unfinished without a dome.

Ohio achieved statehood and like any new state had to make a lot of decisions. One of course being where to put their new capitol. Like all state legislatures Ohio couldn’t decide on where it should go. There was a lot of back and forth but in the end they decided to compromise somewhere in the middle, literately in the middle, and thus Columbus became the capitol of Ohio.

We spent a lot of time on our road trip in Ohio, but Columbus was kind of a stopover to other things so we didn’t have much time to really stay in the capitol. It was Tuesday, July 10, 2018 that we visited Columbus, Ohio. It was early in the morning and our schedule had us going to a theme park that same day so we weren’t able to go inside, we did however see some interesting things on the outside.

Perhaps the most interesting thing about the Ohio State Capitol is the lack of a dome. The building is Greek revival (like many state capitols) and has a tube cylinder shape in the middle but then it just stops. The locals I saw told me they call it the “Chinese hat” because that is kind of what it looks like. 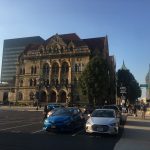 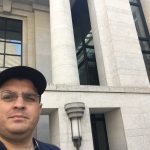 In front of the state capitol. 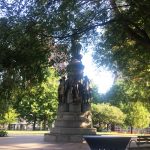 Monument dedicated to the Civil war. 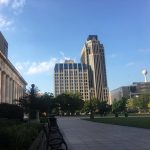 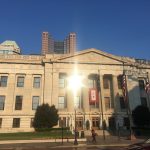 Side view of the state capitol