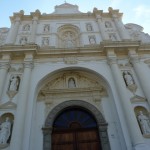 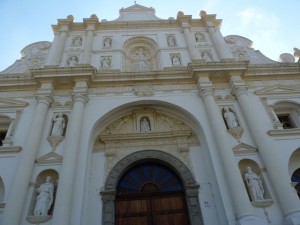 A view of the front of Catedral Santiago.

Due to it’s lack of gold or silver, Guatemala was considered a hardship post by the Spanish conquerors. In order to relieve some of their burden, they immediately set about to construct a cathedral. Construction of Catedral de Santiago (St. James Cathedral) began in 1542. From the outside, Catedral de Santiago looks like any other Catholic church you would see in any Latin American town or city. Big baroque fascade juxtaposed with a small plaza and several small altars inside. Behind the the cathedral however, is where Catedral Santiago begins to look different from others that I have seen. 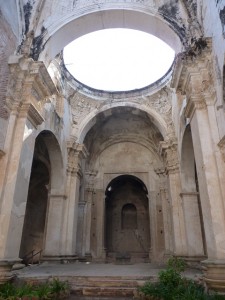 Light shines though the destroyed ceilings.

In order to explain these differences you need to know that, surrounded by volcanoes, Antigua has been repeatedly been plagued by earthquakes. After a really big earthquakes in 1773 the Spanish crown ordered an evacuation of the capital city and Antigua (Old Town) was born. 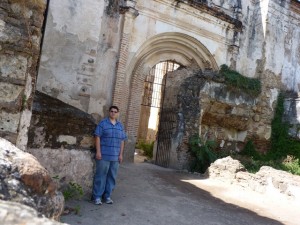 The back entrance of the cathedral.

So, left over now, behind the chapel are the heaps of rubble which for a small donation of 4 Quetzales (about .40 cents US), you are free to explore on your own and witness the effects of 100s of years of earthquake damage. When I visited the cathedral it was still really early in the morning and I was one of a very few vistors in the ruins. I particularly liked where grasses and roots had sprung up and were now forming what looked to be like mini-gardenettes inside some of the chapels. 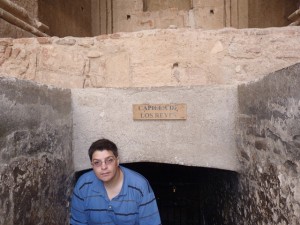 The tomb of Bernal De Castillo is in a tunnel under the main altar.

Under what was the main altar is a small stairway that leads to what is called “La Capilla De Los Reyes” (The Kings Chapel). It was in this small underground chapel where conquistador Pedro de Alvarado, his wife Beatriz de la Cueva, their daughter Leonora de Alvarado, Guatemala’s first bishop Francisco Marroquín, and the conquistador (and historian of the Spanish conquest) Bernal Díaz del Castillo were buried. 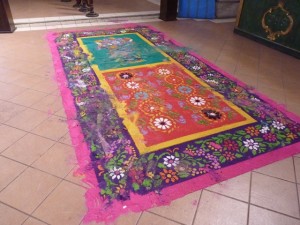 These carpets are made of sawdust and during holy week they have processions over them that destroy them. A symbolism of how beautiful and temporal life can be.

There are many things to do in Antigua, Guatemala, but visiting Catedral Santiago I think gives the best visual of what Antigua is all about.