I have been doing a little programming and now the blog has some extra features. If you click on a picture it will expand, you can move it around, and when you click again it will retract… 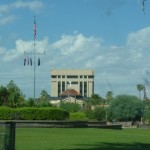 In an effort to promote travel one of our goals as a family is to eventually visit all state capitols. This is going to be a daunting task but I figure we can at least start with the easy ones, which for us means the west coast states. 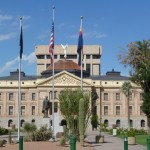 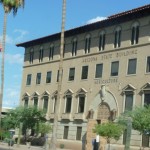 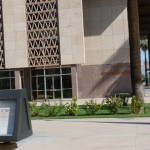 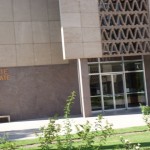 The state of Arizona didn’t ever want to have a capitol building, but they did want to become a state and so it was decided that to show prestige they would build a capitol, but they were going to be practical about it. The building was completed in 1901 for the very decent sum of $136,000, but it wouldn’t be until 1912 (when Arizona became a state) that it would be dedicated as the Arizona State Capitol. Being practical they built a capitol thinking that Arizona could never need any more than 30 house representatives (Arizona now has 30 senate and 60 representatives). The main capitol building served the state assembly until 1960 when the two chamber buildings were built and it served the governor until he moved to the 9th floor of the executive building in 1974. There are many evidences of the practicality of the building when you tour it. My favorite is right at the entrance: 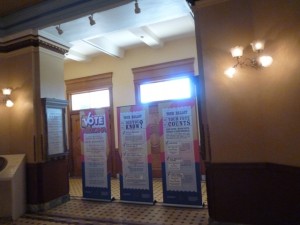 This picture was taken from the second floor of capitol building. If you notice there are some nice doors beyond the banners, but you can’t go there, and you wouldn’t want to open them because they go nowhere. Apparently, the original plans called for this really nice staircase and visitors would enter through the second story, but being practical they didn’t build it, but they kept the doors. Go figure!!
Praticality aside the building is beautiful. Walking inside you are greeted by a big mosaic of the state seal. 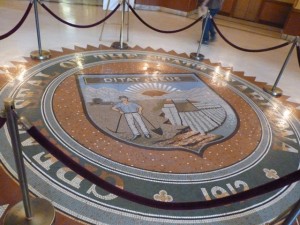 Walking up the metal stairways you can go and visit the old house chamber. Just outside the chambers is a hall with statues representing various Arizona notables. 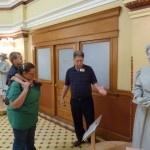 The advantage of it no longer being active you can walk right up and sit in one of the chairs. 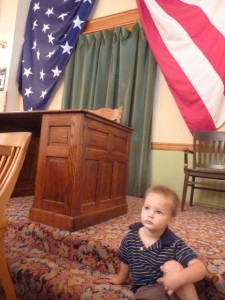 It was been restored to when the state was first chartered. Also on the second floor is the former chamber for the Arizona Supreme Court, which now displays an exhibit of Native American basket weaving. 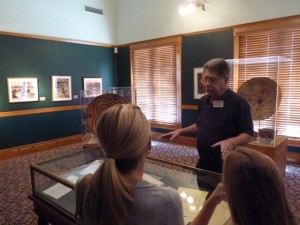 A lot of the old offices have interesting displays. I found this one particularly interesting: 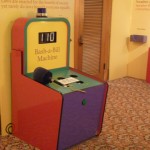 (more interesting was that it was broken)
Going up further you can see the old Governor’s wing. When you get in to the Governor’s Office you will see this guy: 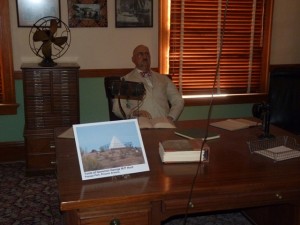 (mouse over to see detail, click to expand)
His name is Governor George W.P. Hunt and the wax figure was commissioned by the State from Madam Toussaints. One of the more colorful characters in Arizona history, he refused to vacate his office even though both houses and the State Supreme Court told him he had lost his re-election bid. The Governor insisted on a vote recount and was eventually vindicated and thus he still stands there, refusing to budge. If your wondering of the picture of the pyramid in front of him it is his tomb. You can go and visit it, haven’t been there yet but it sounds interesting.
While visiting the Treasury room AJ had a fascination with the safe. 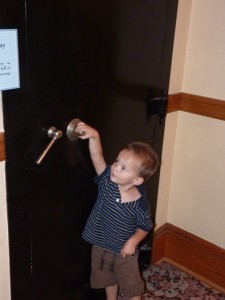 The tour guide showed us how it was locked, but AJ ended up opening it. We wondered wondered what secrets could be inside, but it turned out to just have some extra carpet. 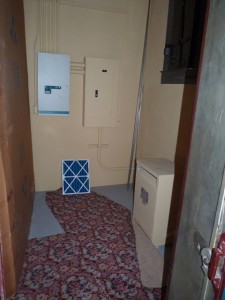 The rest of the room was talking about the Harvey Girls. 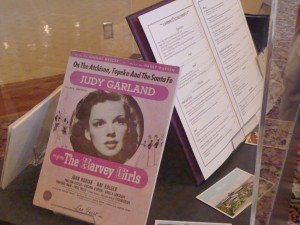 Going back downstairs we looked at some of the exhibits. Mostly paintings, but there was some interesting things to be found. In one exhibit they spoke about the USS Arizona and it’s role in the Pacific. 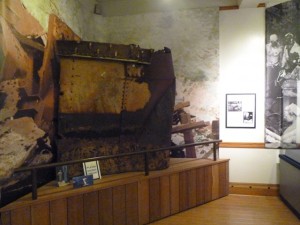 Not much survived after Pearl Harbor, but interestingly enough the Silver survived. 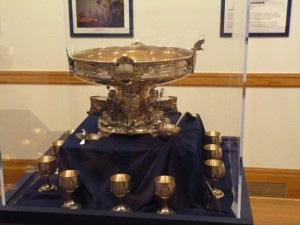 (mouse over to see detail, click to expand)
It was taken out of the ship just a week before the bombings. The USS Arizona never really saw combat before that eventful day, it was really more of a display ship of US Navy Power. Ironically it was going to be scrapped soon because it was considered out of date.
After the USS Arizona room we saw an interesting room dedicated to the Merci Train. A bit of forgotten history, after World War II the French wanted to show their appreciation for the food and supplies given to them. So they took 49 of the boxcars that were given to them, they filled them up with as many gifts they could muster and sent them out to the different states. Most of the gifts are gone, but Arizona kept theirs. The two gifts that interested me the most was a handmade wedding dress and a container made out of an artillery shell. 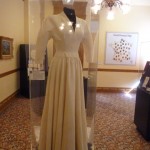 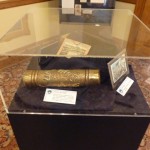 This exhibit was originally set to open in 2003, but they had it shut it up because the too many Arizonans had expressed opposition to it.
Connected to the State Capitol is a beautiful research library. Smoking was always prohibited in the library and so the paintings are really bright. This particular one shows the 5 C’s of Arizona (cattle, citrus, copper, climate, and cotton): 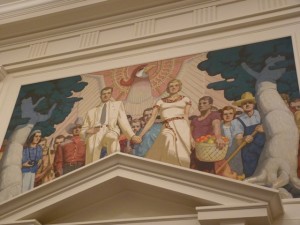 I mention the smoking thing because there is evidence of when smoking was allowed in the capitol. Actually, it is just evidence of tobacco use. You can look at the floors and tell exactly where the spittoons used to be: 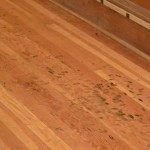 The last thing we saw was the flag hall: 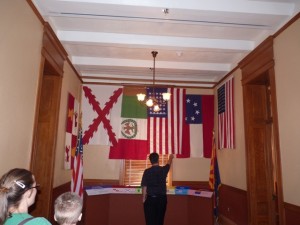 I recognized all of the flags except for the 2nd one on the right. Turns out it was the Confederate Arizona Flag that did fly briefly in August of 1861. It didn’t hold for too long because in July of 1862 the Confederate Arizona government was forced to flee into Texas and in 1865 the Confederate government ceased to exist entirely.
Overall it was a good visit, the place definitely has a lot of history to it. Can’t beat the price (it was free). Hours are Mon-Fri 9:00-5:00PM.