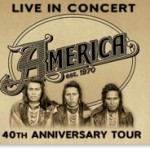 If you don’t know the band America all I really have to say is “A Horse With No Name.” This is not their only #1, but now you know what I am talking about. They are my favorite music band. I have pretty much known America’s music all my life. I grew up listening to their easy going melodies ever since I was born.
I always dreamed of seeing one of their concerts but by the mid 80s they were out of favor. All I had was a America’s greatest hits album (which I ended up buying three copies of because I wore them out from soo much use).
This was good, but then in the early 2000’s something wierd happened. I was visiting my Aunt in Santa Rosa, CA and she told me that she had just gone to an America concert. An America concert in the 2000’s, very wierd. It turns out America was starting to write again. In 2005 there was a concert in San Diego, but I didn’t have enough money to go. More missed opportunities.
Then this last Saturday, May 9th, 2010. America came to Riverside, CA. This was too close to home and too close to my birthday to miss the oportunity. Mixing together money from several holidays past along with a birthday budget boost Denise and I were able to go out and see America at the Fox Theatre in downtown Riverside. Which is also wierd because it has been closed for the last three years.
The concert was fun, America has definately changed over the years, but they are still entertaining. First of all the trio is now a duo. They are however writing new songs. The voices are definately lower, but that is expected I guess when your 59 years old. The sound however is just like it has always been, highly acoustic with emphasis on the rhythm and soft melody. My favorite song from their newest album is a song called “Chasing the Rainbow”:

Also at the concert was Firefall. I have to admit I didn’t know who these guys were untill I heard the following song:

What was cool about them was after their set I bought a CD and all three members of the Firefall band signed my CD. They were very nice people to talk to.
In all the concert was a blast. Definately, was a memory I will remember for a long time. If you are interested in seeing this band in person this is time to go. You can check out their website for future concert dates. They are going all over the world doing 100 concerts, so chances are good they are coming near you too.