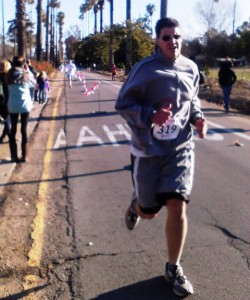 A big thank you to the Riverside Roadrunners for putting on a great race.

I don’t know what exactly happened with my alarm but when I woke up and and the alarm clock said 6:44 AM I was in a panic. The pre-race email I got the day before said the race was going to start promptly at 8:00 AM. Not that I actually believed the email (haven’t had a race start exactly on time yet), but you never know. So getting dressed as fast as we could, it was a quick splash of water to the face,we piled in the car, and raced off to Arlington Sports Park as fast as we could. Luckily for us 1) the race did not start on time, and 2) it is only 4 miles to the Arlingto Sports Park from our apartment (given enough time I could have walked).

I had brought my UCSB (go Gauchos) windbreaker with me. My plan was to hand it over to Denise right before the race, but in 28 degree weather I was not up for giving up my jacket. It was really cold. It was so cold that when the starting horn went off and I started running I knew I was going fast because my lips were literaly freezing due to the windchill. At first they hurt, but then they got numb. My Scout training said that was bad, but my feet were just flooring it. After a few minutes I looked at my GPS and it told me I was going at a 5:34 pace. Despite running with the leaders I knew that was not a good pace for me. I could have probably kept it up for a little longer, but it would have meant risking a potential crash on the course.

Going with the mantra “nice and steady”, I backed off my sprinting pace and made my way into my first curve. It was a good thing I backed off my early sprint because it wasn’t long before I faced the first of three very steep hills in the race. Luckily, they were not very long, but they were long enough to knock the wind out of me. The only two times I really stopped (walked) during the race was at a water stop (I didn’t bring any with me) and at the last hill. As soon as I got up that last hill however I started to “rev up the engines” once more. The last half mile was mostly down hill and I took the advantage. On the last .2 miles I could see the finish and I pushed it to my max. Looking at my runkeeper I was running a 5:01 pace at the end, that is about 12 miles an hour if you were driving in your car. Not as fast as a lamborghini, but your not going to be catching me in your golf cart.

Finishing, I knew I had done well, but I was a bit too tired to stick around for the official times to post. Luckily, we live in a modern age where you can access your email from your phone, and so I had my official time by noon. The official time was 26:17, for an average pace of 8:27 per mile (or about 7.1 miles an hour). This was also an official PR (Personal Record) for me in the 5K category. I placed 48 out of 302 finishers which puts me in the top 16%. It also makes me a contender for the “Corral A” group (you neeed to have a sub 25 race to get in). They get a guaranteed spot at the starting line in the really big races and a really low number (my bib number was 319). I am getting really fast, but to put it in perspective the 2012 5K Gold Medalist for the London Olympics ran his 5K in 13:41. I am not quite ready for the big time, but I will say that even an Olympian can’t lap me now, and that is saying something!