↓
Home→Running→How to Lose $500 Chasing a Squirrel aka. Visiting a Minor League Baseball Team. 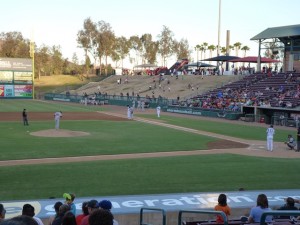 The boys of summer are back!

There are several leagues in the minor leagues. The way it goes is that just under the Major League is what is know as the AAA division, then there is the AA division, then the A division, and under that two more half league divisions. The Lake Elsinore Storm are under what is known as the A division. The games in this division are not the most exciting out there. Depending on how the players do they will undoubtedly move so it is hard to get excited about any one player or team. The good news is the tickets are substantially less than what you would pay at a major league team and do to the inherit small nature of these games you get more of the old-time baseball feeling than if you had gone to a major league stadium.

At this point you may be thinking to yourself, “This is all great and good John, but what does it have to do with you, a squirrel, and $500 dollars?!” Ok, well to explain I think I need to first introduce you to the squirrel…

Yep, that is a very large squirrel. See what happened was when I walked into the stadium I went over to the promotions booth to see if I could snag a freebie. Since the minor league games are not as action packed as major league games are they always run little promotions between the innings. You kind of have to be willing to do some crazy things, but you lose nothing and might get something out it. It was while at the promotions booth the promotional ladies saw my running shoes and asked me if I did any running. I said “as a matter of fact I do run a little bit.” They then said “How would you like to make $500?” I was immediately suspicious but curious so I asked them how. They said all I had to do was run from one foul post to the other, 400 meters. Not too bad, I can run 400 meters… 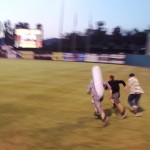 “Oh, and you have to run against our intern named ‘the squirrel’.” It turns out that “Mr. Squirrel” is a former east coast all state track and field champion. I didn’t stand a chance. As soon as the announcer said go I could see that I was going to lose. There was another younger guy out there with us and he lost to. Mr. Squirrel was fast, he was so fast he almost ran into the wall when he got to the other side. I for my part did my best and ran as fast as I could. Even though I lost many people waived to me after the race and told me I gave it a fighting chance so that was fun.

I lost, the Storm lost (4-1), but we all had fun so it didn’t really matter. It is nice to think that people see me as “a runner” these days, but it also good to sometimes give myself a bit of reality check. Anyhow, if you have the time and a bit of money I would highly recommend visiting your local minor league baseball park for a game. Who knows, maybe you will have better luck than I and actually get the $500 dollars! And if you don’t, I am sure you will also still have a good time.