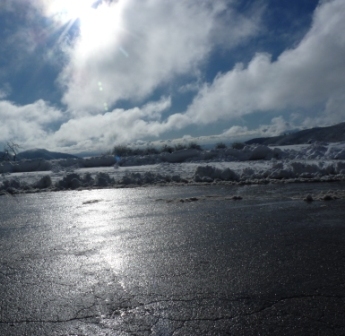 People often ask me after a storm “So, How Cold Was It?” This is a hard thing to convey to the rest of my Southern Californian friends. I can’t blame them, snow is not really something we see too often in Southern California. Being a mountain dwelling Southern Californian I get to see the snow every year. Unfortunately, we had to go to court on Friday (stupid Red Light Ticket…) and with the weather we didn’t want to risk getting stuck at home (thus being in contempt of court), so my mom graciously hosted us for two days. When we did get back home however, this is what we saw:

Now, I am sure if you are from most of Southern California you will look at this video and say to yourself, “I would never want to live in that.” This would be valid, but before you judge our situation too harshly I give you this picture: 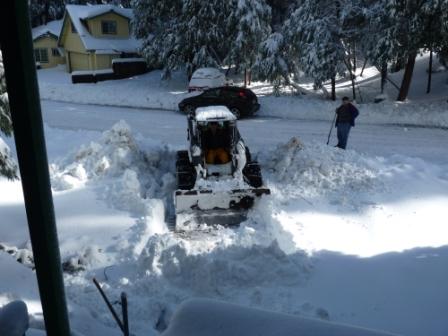 This picture was take about an hour after I had been shoveling out our driveway. Several enterprising teenagers had come by while I was shoveling and had offered to help, but when I told them that I only had $10 in the house, they left rather quickly. So while I was shoveling this man in the Bobcat comes up to my house. I look at him and I tell him “Sorry, I only have $10.” (the going rate for Bobcats is like $40). He looks at the driveway he says “whatever” and proceeds to dig out an ample space for my car in less than 5 minutes (thus saving me about 3 hours of work). While he is doing this I tell Denise to get my $10 dollars, but before Denise comes back the guy goes away. This is why I live in Crestline. You may have some good neighbors, but I have great ones. Oh and just so you don’t think I am a bad neighbor, an hour later when the road scrapper came by I went with my shovel and helped a different neighbor dig out his truck.

PS Don’t come and visit us for a few days because CHP just announced that our mountain roads are closed to any visitors.