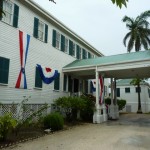 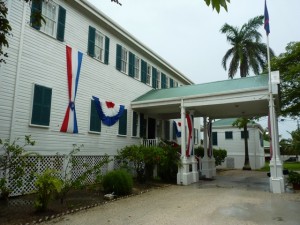 The first meeting of the Government House in Belize was in 1815 when a public meeting on the site was held to decide if the colony should allocate funds to the building of a house for the Superintendent. A sum of 3,000 pounds sterling was set and the building commenced. The first Superintendent to live in the house was Colonel Arthurs who had chosen the site due to it’s downtown location and close proximity to St. John’s Cathedral.

In it’s early days only Belize’s elite were allowed in to the house, but today the Government House is what they call a “House of Culture” and anyone with $5 USD can get in from 8AM-5PM. When we were there Denise and AJ went and looked at the displays available (a lot of local art) and some historical displays. I (John) decided to sit on the portico steps and I read the story about how the Baymen defeated the Spanish armada. 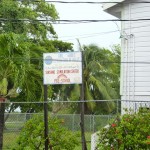 The Girl Guide (Scouts) headquarters are right across the street. 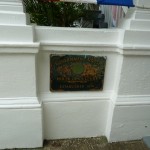 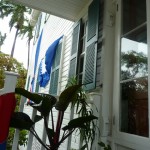 A view of some of the storm windows. 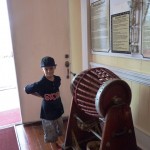 AJ learning about Boledo. A form of gambling that involves a lot of mysticism. 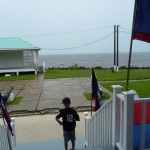 A view of the coast from the Government House. Normally Baron Bliss’ boat is here but we didn’t see it. 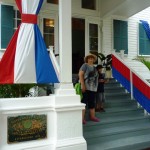 AJ and Denise on the portico steps.