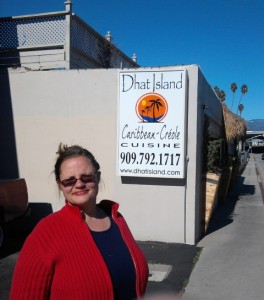 Dhat would be Denise at Dhat Island.

We like to consider ourselves adventurous people with no plane tickets. We don’t get to travel much of the world, but we will go to semi-great lengths to find something new. One of the ways we like to find new things is by using a site called Groupon.
Groupon is a site in which a new business trying to get business will deeply discount their prices. In the case of Dhat Island they were offering a pre-paid coupon of $20 dollars for only $9 dollars. That plus the fact that a new Disney movie (Tangled) was coming out across the street was more than enough planning than we needed to do to ensure that we would have a happy anniversary (8 yrs go by fast).
According to the staff at Dhat Island they started out as a catering place and are now trying their hand at being a restaurant. The location is easy to find off the 10 freeway, but it shows that they are still getting used to being a restaurant. Luckily for them though they are a Caribbean themed restaurant and so if the place seems a little laid back it is all in tune to the theming.
Now you would think by the amount of times I have been on those boats at Disneyland I would be an expert on all things Caribbean, but alas I am not. Had you asked me what Caribbean food was supposed to look like I might of just of muttered something about Blue Bayou and mint juleps (which by the way are not Haitian). When I asked what the best thing on the menu was the server said that it was the chicken, but the thing was I wasn’t really craving chicken at that moment (it just so happened that Denise had cooked chicken the entire week before). What I really wanted was pasta and surprisingly they actually had pasta! Not only that, but when I asked the server about this he said they had pasta all the time in Haiti, who knew?!!
The pasta was definitely different but it was good. It was in a creamy white sauce and had little peas (at least I think they were peas). I am not usually a fan of peas, but it was good, kind akin to macaroni salad, but with white cheese and a little bit of chicken (guess there was no getting away from chicken that week). Denise had a eggplant creole dish, which she said she liked. I tried a bite and it was good, but it looked and tasted just like gumbo to me (than again I never claimed my taste buds to be that refined).
All in all it was a good, fun place to go. The staff is very nice and the the prices are decent. I do hope they get more popular, if only so they get a better parking lot.
I want to say thank you to my Uncle Bob who’s blog post reminded me that I needed to write about this place myself. If you are interested in reading his review of the place you can go HERE. Hope you try it out. I think you just might like it.