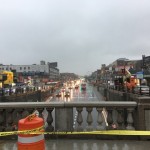 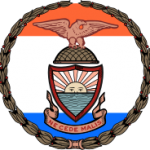 The Bronx motto translates to “Yield Not to Evil”

Our original plan for visiting New York City included visiting all five of the New York Boroughs. We did accomplish this goal, but the day we had planned for the Bronx did not quite go the way we wanted. What wanted to do is to go to a park near the zoo and eat pizza in the northern Little Italy of New York. What  we did is get stuck in a very heavy rainfall and ended up getting very wet while running down the Gran Concourse. Which is probably just as well because looking at Bronx history I learned it too didn’t quite go the way it wanted. 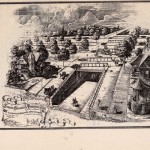 This is a drawing of the Grand Concourse in the 1890s

To understand this you have to look back to New York in the 1890s. At that time New York was booming. So much so that they had so many jobs available that they were practically begging people to come and work for them. Hence a great migration was started and poor people from all over the world started arriving in New York. At first when the immigrants started to arrive, they lived in Manhattan, but the locals very quickly came to the agreement that although they needed workers, they didn’t really want to live close to them. No worries, there is lots of money and all of this land north of Manhattan in an area known as the Bronx. This guy, his name was Aloys Risse (who happened to be an immigrant himself), got this great idea on how to get the immigrants to the Bronx. It was a better than great idea, it was a grand idea, The Grand Concourse.

The Grand Concourse was a huge two story street that was to rival the  Champs-Élysées in Paris. It was bigger, longer, and it had all these cool buildings built along the way. Everything was great until the prohibition came along in the 1920s. A bunch of poor immigrants and a law the majority of the people did not want to follow gave rise to bootleggers (illegal alcohol sellers) and that gave rise to crime. The situation got worse with the Great Depression and World War II, when many people left the area. In an effort to boost the population of the Bronx and to clean up Manhattan, the city adopted a policy that anyone on welfare in the 1960s was to be moved to the Bronx. This created a huge immigration of African Americans, Mexicans, and Puerto Ricans to the area. They didn’t get along with each other very well and a wave of arson swept the Bronx in the 1970s. It was so bad that by 1980, 90% of all housing units were declared unsuitable for habitation. Eventually the citizens of the Bronx had enough and a ten year housing plan was put into effect. Financially backed by the city of New York, it worked and in 1997 the Bronx was declared an “All American City”. 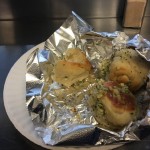 Garlic twists from the Bronx were yummy. 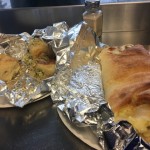 Enjoyed the chicken roll. Reminded me of Costco. 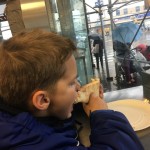 The result of this is the Bronx still has a lot ethnicity it had back in the late 19th century, but most of the historical buildings are gone. The Grand Concourse however remained. It was on that very long, very wide road we briefly paused to take a picture, declared that we had made it to the Bronx, and quickly found a pizza place that was warm and dry. We were very much wet that night coming home, but we like the Bronx, can say we made it. 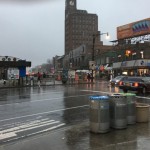 This is a view looking to the police station. I don’t know why but I thought it was hilarious they were putting on a musical about the Bronx.