Scouting is actually something that is not new to me. Scouting to me actually started for me in the early 80s when I joined the Cub Scouts. I continued through to Boy Scouts and reached the rank of Life Scout. The last time I did anything of any real substance with Scouting was back in 1991. Then about a year ago the 2nd Counselor in the Bishopric came up to me and said “you are the Assistant Varsity Coach.” I remember filling out an application and I went to the Teachers (14-15 yr old boys I advise) and told them I was their new Varsity Coach. They told me they were not interested in Scouting. I was ok with that, so I did nothing about it. Time passed by and my Teachers got older and left me. When the new ones came in they told me they were Stars and they wanted to become Eagles. Furthermore they had discovered I was their Coach. I told my new Teachers that I was their Coach, but I didn’t know what to Coach them to do (some Coach). Anyhow, I told them that I would figure it out. Luckily, they just called a new Scoutmaster who it turns out actually knew what we were supposed to be doing (he used to be an Eagle Scout). Having the motivation of the new Scoutmaster I signed up for Varsity Basic Leader Training. Actually, what I learned was that before I could even sign up for training I had to do a bunch of online tests. The first one I did was Youth Protection (a class about how to protect youth from sexual predators). Then I had to take “This is Scouting” (a three hour online course to teach you the importance of Scouting). If that were not were not enough I also took: Fast Start for Boy Scouting, the Troop Committee Challenge, Unit Coordinator training, Fast Start to Unit Coordination, Climb on Safely, Physical Wellness, Safe Swim Defense, Safety Afloat, Staffing the District Committee, Trek Safely, and Weather Hazard Training. Three days later I had passed enough online quizzes to show up to my first Basic Leader Training course. The first part of the training was Indoor Leader Training. This was an all Saturday class that taught us the basic organization of the Troop (in my case it is called a Team) and how to get a bunch of teenagers to run a well organized program. It surprised me how much training I needed for a program in which is really run by the boys, not the adults. We are there to make sure a catastrophe doesn’t happen and to teach, but the leadership is all on the boys. Anyhow, that done we then had a two day overnight training called Outdoor Leader Skills. It was like a very intense First Class Board of Review. We had to basically demonstrate we could do everything a First Class Scout could do (first aid, knives, lashings, cooking, plant and animal identification, knot tying, ten essentials, etc.). I was a little rusty on some of my skills, but I had reread the Scout Handbook prior to the course so I was able to do ok. The reward for all this learning was the following three cards and a patch that says “trained.” Anyhow, next time you see an adult Scout leader and you see a trained patch you now know a little of what they did to get that patch. 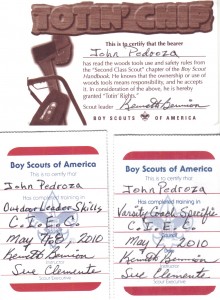