“So, three exciting and notable things have happened since my last blog. (And you will soon learn how dull our life is, we have a pretty low bar for exciting around here, fair warning).

For number one, I’m really cheating a bit, because this happened two weeks ago, but I was covering our Spring Break, so, drum roll please…..

AJ has started solid food!! Well, if you call rice cereal solid food, which we do around here. He’s not yet that into it. We keep trying. These two pictures are of the first two days he ate from a spoon. I like the first picture because he seems to be saying, “”Really, this is food? You expect me to keep eating this?”” The second, is, of course, John giving it a try. 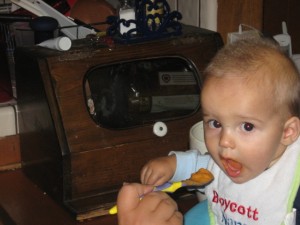 You’ll all be happy to know that his four month appointment went fine, he’s gained and inch and 3+ pounds, putting him at 25 inches and 13 lbs 11oz, 50th percentile for height and 25th for weight.

Abuelo Pedroza came to visit, just for an afternoon. AJ’s namesake was recovering from a case of herpes zoster, i.e. shingles, so even though the site was covered, and they weren’t even scabs (they were more like scars) for safety’s sake, he didn’t get the chance to hold AJ this time.

And, last of all, number three, cue drum roll…

John’s big project at work launched and he made the news. Well, not really, but his project did! He’s been working on creating a form online so that people can report non-emergency property crimes that don’t have a suspect. (Basically crimes that the police are going to be able to very little about, but for which you need a police report number for insurance purposes.)

Check out the online form.

You can also watch a news blurb about his project.

The local report in the newspaper quoted his ultimate supervisor, and a different report had an interview with his boss’s boss. The closest he got to being mentioned was the local PBS affiliate that mentioned that “”a supervisor”” would review the report. That’s John, “”a supervisor””, since right now he reviews ALL the online reports. He’s does think it’s a little funny that after all the work he (and a few others) did, the people who got the credit are the people who did nothing more than approve the project. That’s life in a bureaucracy, and I’m sure most of you have similar stories. After being rolled out for a week, and several days of patching broken links, etc, he says the reports are really rolling in today. He attributes this to the fact that the on-hold recording for the Telephone Reporting Unit now informs people that instead of waiting on hold for an hour plus they can file their report online.

So, that’s our three exciting things. Talk to you all next week, if not sooner.
“