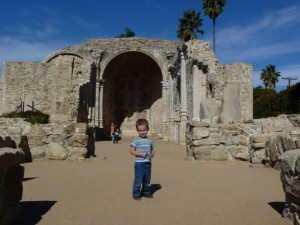 When talking about the San Juan Capistrano Mission there are so many places for me to start writing. I am not a Catholic, but I will say there is something special to me when I think of the California Missions and I think it has to do with San Juan Capistrano. San Juan Capistrano was the first of the 21 California Missions that I ever visited. When I first went there I think I was about 5 or 6 years old. I don’t remember much, but I do remember standing just about where AJ is standing in the above picture. Back then that was about as close as you were allowed to get to the great Stone Church because they had not yet retrofitted it. The other thing I remember was seeing the big garden. There used to be big pepper tree. 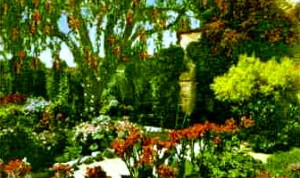 The pepper tree was the largest in the entire United States. It died in 2005, but the gardens are still beautiful even without it. The other thing I remembered was eating a really good burrito at this place called Pedro’s Taco’s. It luckily is still around: 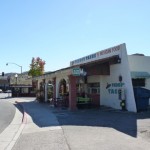 The San Juan Capistrano is known as the “Jewel of the Missions” and it lives up to it’s representation. There are many things to do and see there and I wont be able to cover even a tenth of them here in my blog but it is always fun to show highlights.

The first thing you will see when you go to the mission is a big sign that says it was established on November 1, 1776 by Father Sierra. 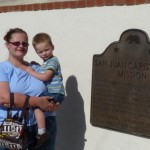 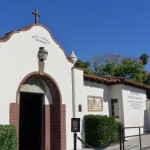 This however is only mostly true. The true story is that Father Lausen and Father Amurrio first started building the San Juan Capistrano in October of 1775, but in November of 1775 news got to San Juan Capistrano of the native uprising in San Diego and the Spanish army decided it was better to go back to San Diego and help them out. So the fathers buried all the bells and left one cross up. When they came back a year latter in 1776 the cross was still up and so they unburied the bells and started building again. 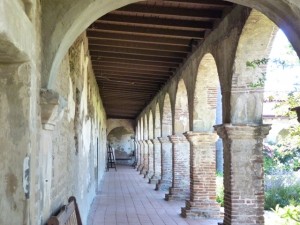 The building was made out of adobe bricks with fired roof tiles. Makes for a very picturesque building, but not very earthquake resistant. In December of 1812 a big earthquake rocked Southern California and the great church was destroyed. Unfortunately, they were having mass the same time the earthquake hit and so 40 people were killed. After that fateful day the San Juan Capistrano Mission changed hands many times and went into a terrible state of neglect (as did all of the missions). This is where the story got very interesting to me.
In 1895 after the mission was in almost complete ruins a group called the Landmarks Club of Los Angeles came to the site, rebuilt the old soldiers barracks, and made some attempts to stabilize the remaining buildings. Then in 1910 Father O’Sullivan walked into town and changed everything. 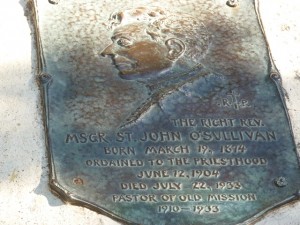 Father O’Sullivan was an interesting man to me. Basically he came to California to die. He was from the East coast and he was suffering from an advanced case of tuberculosis. He came to the then abandoned mission and instantly fell in love with it. He said he could relate to it’s state of disrepair. He figured since he didn’t have long to live he was going to make everyday count and he got to task gathering whatever he could from the mission. His original plan was to gather up all the fallen tiles and artifacts and categorize them so that after he died someone could start repairing the buildings. Funny thing was it was several years later, he had finished his project, and he wasn’t dead. So he went onto the next project and started repairing the buildings figuring someone could decorate them after he was dead. Again however he finished this project and didn’t die. In fact he started getting better, but he needed money for decorations. At first he charged .10 cents for the curious to tour the building, but to get more people coming he started talking about the sparrows. 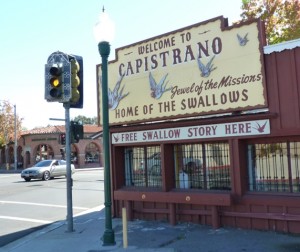 Every March they would come to the mission to eat the mustard seeds that would grow abundantly in the area. Father O’Sullivan knew this was a curious habit and promptly started writing about it. People got the message and started coming every year. By the time Father O’Sullivan died in 1933 the restoration efforts for San Juan Capistrano were in full bloom. In 1939 composer Leon Rene was so inspired about the mission that he put in a little office at the mission and started writing the song “When the Swallows Return to Capistrano.” 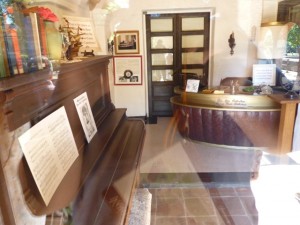 A group called the Ink Spots sang this song and it became a nationwide hit:

Due to efforts of Father O’Sullivan and the popularization of the song, the San Juan Capistrano Mission is a major destination today. 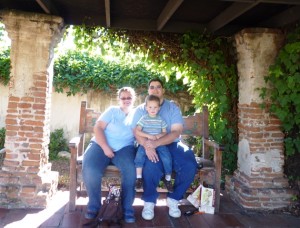 Our family had a great time exploring the mission grounds. It made for a nice afternoon drive. As of this writing the mission was open most days except major holidays and cost $9 which included the headset tour.
As always here is a little video of the some of the things we saw at the mission.

Also, if you are interested here is a little photo album of some of the things we saw. To learn more about a picture in this gallery click on it, then click on the “San Juan Capistrano Mission 2010” title to come back: