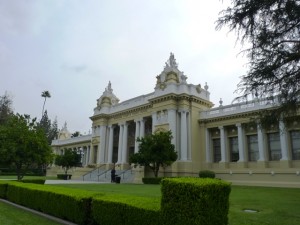 Still pretty much the same after 100 yrs.

On May 2, 1893 Riverside County was created from parts of San Bernardino County and San Diego County. It was during this vote that the people chose Riverside as the county seat. It was in the year 1900 the county leaders found their inspiration for the county courthouse by visiting the Universal Fair in Paris, France. Emulating the Petite Palais, a unique structure was formed and finished in 1903 by a Chicago designer named Franklin Pierce Burnham.* 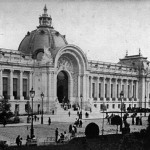 The style for the courthouse is what is known as the Beaux Arts. This style is know for it’s multi-layered façades, many columns, and roman depictions of deities. Fitting the bill almost entirely, the Riverside Historic Courthouse pretty much incorporates all of these aspects.

Overtime the courthouse became very rundown. The Landers and Northridge earthquake in 1994 damaged the building and the idea of destroying the courthouse was entertained. This however was avoided as both the City and County of Riverside got together 24.7 million dollars to restore the building.

When I was a student studying law I had a class with Judge Victor Miceli. He was a long time judge (they named the law library after him) in Riverside and he told me a lot about the Riverside Courthouse. One interesting fact he told me was even though the earthquake almost destroyed the building it also uncovered some beautiful stained glass inside the courthouse. The other was that the courthouse was a city and county landmark but not a state or national landmark. The reason why is because had they designated it a national landmark, they would not have been able to retrofit the building for electronics and they wanted to be able to modify the interior to better display evidence.