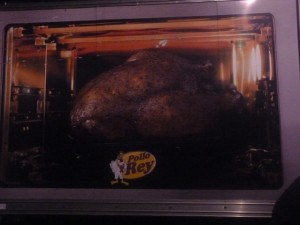 There is no doubt about it, Chicken is King when it comes to the diet of Guatemaltecans. Chicken is everywhere in Guatemala and served up in almost any way you can imagine. With that in mind our first day in Guatemala city we decided to go to Guatemala’s main fast food export, Pollo Campero. We had gone to a Pollo Campero in California and based on the food we had there we were kind of excited. We knew for sure that since the Pollo Campero was good in California, it had to be better in Guatemala. Boy were we wrong!! 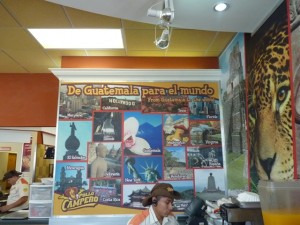 California Pollo Campero? Check, been there.

There are a ton of Pollo Campero restaurants in Guatemala. Like McDonald’s here in the USA, you can’t go too far in Guatemala without seeing a yellow and orange chicken waving at you. Clean and well priced (all food in Guatemala is cheap), they are very convenient. Problem is for an American they are very boring. Unlike the Pollo Campero in California, I found that Pollo Campero in Guatemala does not have many choices. You basically can get pieces of chicken grilled, fried, or in a salad. This was surprising because of all the different ways they cook chicken in Guatemala, but Pollo Campero apparently knows what they are doing because the stores seemed to be doing good business while we were there. Along with the lack of options was the lack of sides. In California they had 12 different sides and a salsa bar. In Guatemala there was no salsa bar and you could choose between cole slaw, dinner rolls, or french fries for side. 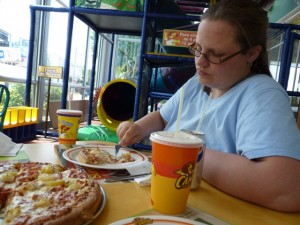 One thing that was different in some Pollo Campero restaurants was that some restaurants had Pizza. While coming back from visiting a cave in the town of Santa Elena we visited one such Pollo Campero. The inside of the Santa Elena Pollo Campero was very big, so much so that it had an indoor playground. AJ, really liked playing in the ball pit (you hardly see those anymore in the USA). Ironically, despite finding pizza on the menu, BBQ chicken was not an option. In our case we settled on a Hawaiian Pizza with ham and pineapple. Guatemaleans love their chicken, but we also found a lot of pizza places so it wasn’t that unusual for us to be eating pizza in Guatemala. Unlike the Pollo Campero in the USA, in Guatemala they serve you at your table. Also they give you real forks and knives (make sure you don’t throw them away). 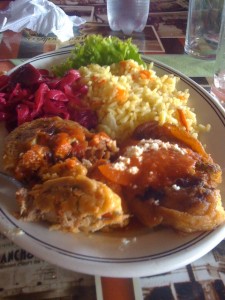 This chile relleno plate only cost me $3 dollars.

All in all, it was decent, but if I hadn’t written about Pollo Campero before I probably wouldn’t be writing about it now. I would like to say that even though Pollo Campero did not meet my expectations, food in general was good in Guatemala. Although maybe not as diverse as say Mexico (Guatemala is a small country), it did have a few options that stood out. For example I really enjoyed the Guatemala version of chile rellenos, instead of cheese they fill it with a pulled pork mix. Fruit was abundant everywhere we went in Guatemala and being as fresh as it was, it was very flavorful. My favorite thing for breakfast when I was there was mixed plate of fruit with a little bit of yogurt. Our last day in Guatemala we bought some assorted tamales that were really tasty as well.