Fridays is the our traditional pizza day for our family. Many of you are undoubtedly confused by the title. For those of you not in the know Taco Bell is a “sort of” Mexican food place. Taco Bell is definately not known for their authenticity, but I think they really “jumped the shark” on this one (see wikipedia for further details on the phrase).  Now as a Mexican American I can definitively tell you that pizza is NOT a Mexican. As an American however I can tell you that the mere conventionality of tradition has never stopped us from inventing yet another crazy way to make ourselves fatter. So behold, Taco Bell’s Mexican Pizza: 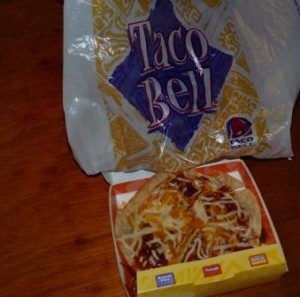 A strange concoction it is made of two flour tortillas that have been fried to the point at which they are stiff. Inside the two tortillas are re-fried beans and ground beef. On top is red sauce and a blend of American and cheddar cheese. Surprisingly, the taste is not that bad. It is kind of like a deranged quesadilla. I think if I had to give this creation a new name I would call it the Pocho Pizza. Not only is that name catchier, it would much better describes what is going on here. Anyhow, if you want to try it yourself it is available across the nation for the low, low price of only $2.99.