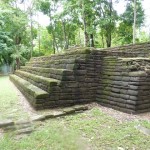 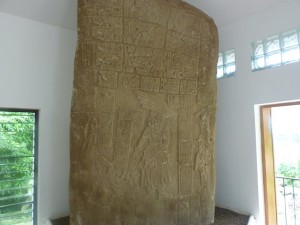 It was from this stella that Lim Li Punit got it’s name.

Nim Li Punit  is Mayan for “Big Hat” which it got from one of the stellas at the site that has a ruler with a very large head piece. If I were to name the site I would have named it Monument Hill. It certainly had a lot of them. Almost every few feet you walked you could see the base stone for a stella. Walking through the site there were clearly three main areas. One area appeared to be a ceremonial plaza, the second a ball court, and the third a royal burial ground. 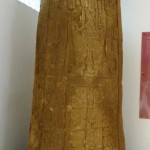 This stella talks about a king that took over after a big fire in 746AD. 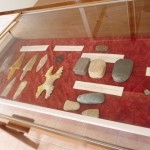 Some of the tools used by the people of Lim Li Punit. 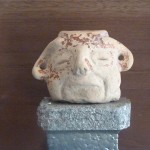 I found this old man charm kind of interesting. 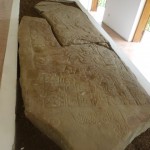 This was the largest of the stellas found in Lim Li Punit.

Nim Li Punit was recently discovered in 1976 by a archeologist named Norman Hammond. He was from the British Cambridge University Museum. There were excavations in the 80’s and the 90’s but the site today is mostly untouched. This is evident in the many rocks that are strewn about the area. The site is located in Southern Belize in the Toledo District. The Toledo District is known for its thick jungles and heavy rainfall. To get to the site you had to drive a half a mile from the main highway. It wasn’t too bad, but like most hill roads in Belize it was very bumpy. When we were there we were mostly by ourselves. The only people we saw were grounds workers who were using some of the old stones to make walkways.

The steps to the main plaza were kind of steep. 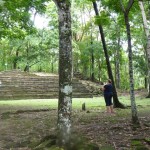 AJ used the hop method to get himself up the plaza steps. 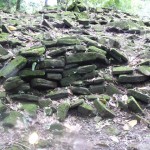 Most of the area still looks unexcavated. 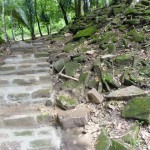 Workers were piecing together the old stones to make new walkways. 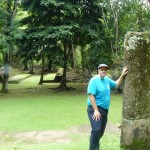 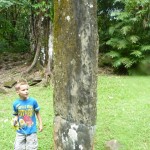 AJ trying to find meaning in a stella. 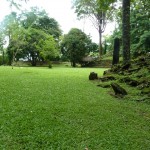 A view walking up to the royal tomb plaza. 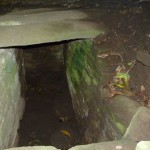 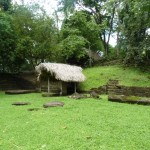 A little hut protects the stella of a royal tomb.

Reading what I could on the stellas it looks like Lim Li Punit was kind of a coronation ceremony place. A lot of them certainly took place there. It looks like the city had it’s heyday between the 5th and the 8th century. In the 8th century it isn’t clear what happened but looking at the stella it appears that there might of been a bit of turmoil going on because the leaders changed a lot. Whereas in a 5th century stella you would have one stella dedicated to one king, in the 8th multiple rulers would use the same stone to mark their coronations. 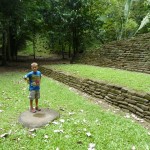 AJ on the start game mark of the ball court. 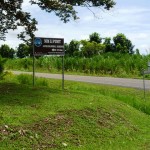 To get up to Lim Li Punit you have to go up a half a mile up a rocky road. 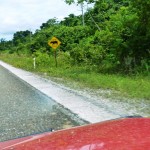 You don’t see many tapir warnings in the USA. 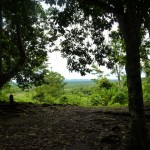 The view from the royal tomb area was spectacular. If you gotta go, this is the view you want to have for eternity.