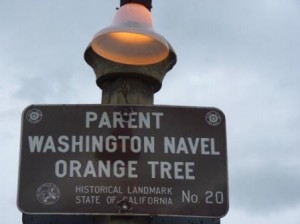 California is world renowned for its citrus industry. It all started back in 1870 William Saunders, a horticulturalist at the United States Department of Agriculture, sent Eliza Tibbets a navel orange tree he had received from Bahia, Brazil. The tree got to Riverside in 1873 (not exactly speedy delivery) and it started California’s citrus industry. According to the book, A History of San Bernardino and Riverside Counties, three tree were planted. During the first year they were planted, one got trampled over by a cow and died. Later President Theodore Roosevelt in 1903 transplanted another tree to the Mission Inn Hotel. According to the hotel management that tree died in 1922 (where was the CCC on that one??). In order to protect the last tree the City of Riverside moved it to the corner of Magnolia and Arlington (which back then was the outer limits of the city) and surrounded it by a big fence. 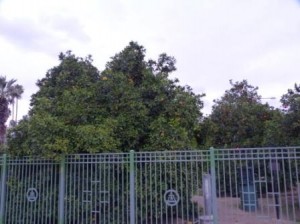 This last tree is still surviving today. In fact on Saturday, March 6th, 2010 we went to go see it. Sure enough, over 100 years later this tree is still doing well. In fact, when we saw it there were plenty of oranges on it. Can you imagine? Over one hundred years and it is still bearing fruit. We cannot say if the fruit was good or not, the fence is still there. No hundred year old oranges for us!
We did make a video however:

There are also some grapefruit that was planted there in 1958, but let’s face it, who cares about 50 year old grapefruit when you can look at 100 year old oranges…