Sometimes it is OK to try new places.

I could talk about my first food of the new year but that was an apple. Apples are really good, I mean it was a Fuji apple, but I don’t think many people would get too excited about reading about it. If you got here via Google Search you are probably really disappointed right now in this whole post because the picture to the left is about ramen and here I am talking about a dumb apple. An apple that I didn’t even take a picture of, but I keep writing about it as if it were the best apple ever, and it wasn’t!

OK! OK! I will talk about the ramen. It is what I titled this post. Today after seeing the Tournament of Roses Parade we decided to take the Gold Line Metro a little further and go into Little Toyko. Our goal was to go to Daikokuya, my favorite ramen shop, but when we got there the line was long. Very long. So long that after waiting for hours on Colorado Blvd. I knew I had no hopes of getting my family to wait another two hours for a bowl of ramen. So thanks to Yelp I found out that the #3 rated ramen shop in Los Angeles was just a few doors down the street. 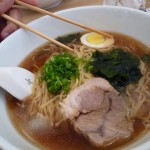 As far as ambiance goes I have to say that Mr. Ramen has none. The restaurant consists of a few sparse tables pushed up to a really long wall and a few random paintings on the wall. I tried to figure out the theme, but between the hugging fish, the left over napkin drawings, and the sumo posters I was stumped. The music was reggae music, which was ok, but kind of weird for being in Little Toyko. It wasn’t that bad though, overall it was clean and we were really there for noodles anyhow.

As far as the noodles go they were pretty good. I had the pork Shouyu (soy) ramen with a side order of Gyoza. The Gyoza were good nothing special, but they were good. The noodles were thick and al dente, which is exactly how I like my noodles. They looked like they were made by a machine, but they tasted good. The broth was hot, but felt a little thin as far as restaurant ramen goes. The egg and pork were a bit cold, and the egg was not boiled in the broth. The ramen had a good presentation with all the usual accompaniments. The price for the combo was $9.95 (a bit high overall, but normal for the area).

Overall, I have to say I enjoyed this place. It was a very good ramen shop, better than most, but it was not the greatest. Don’t get me wrong. If you are an American and all you have ever had is Cup O Ramen Soup, this is going to be a whole different world to you. The type of ramen I write about is a whole different ballgame than what you are probably used to. That said, so far the greatest in the CA ramen market is still Daikokuya (in my opinion). If it were up to me I would have waited 2 hrs. for Daikokuya. If I really pressed my family I could have done it, but then I would have made everyone miserable and who wants to do that?! I am not sure if there is anyone out there better than Daikokuya but there is still one big player in Little Tokyo that I haven’t tried yet, Orochan Ramen. So I guess I am going to have to go there and see if there is someone who makes a better ramen than Daikokuya, but I doubt it.