↓
Home→Uncategorized→Eating our Way through Little Toyko.

“Today we are on our way to WDW but beforehand we made a detour to Santa Monica to visit D’s brother Tom. We were looking for things to do today so we went to the Japanese Village Plaza in Little Tokyo in downtown Los Angeles. Many have probably never heard of the place. It is known for two things bean cakes and Mochi ice cream. Both are traditional Japanese desserts and were very good. When we first got there we ate at a Japanese Buffet/Karaoke restauraunt. It was good, no one was singing but there was a Hawaiian girl with her Ukelele in there. After lunch we walked up and down the mall looking in all the Japanese import shops to work down our lunch. For dessert #1 we went to Mikawaya home of the Mochi ice cream. It is an interesting dessert made of a really chewy rice coating and inside they put ice cream. You eat it with your hands. 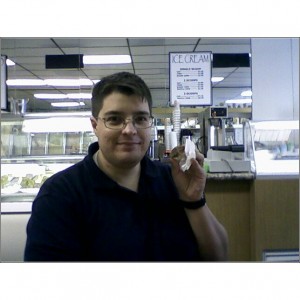 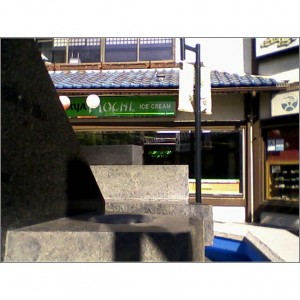 We then went across the mall to get a bean cake pastry. Basically, hot bread goodness. To finish up we went into a Japanese Grocery store bought some pocky and a japanese soda (it is really hard to open one of those things).

Later tonight we plan on going to the Los Angeles Airport for the first of several flights getting us eventually to Orlando.”